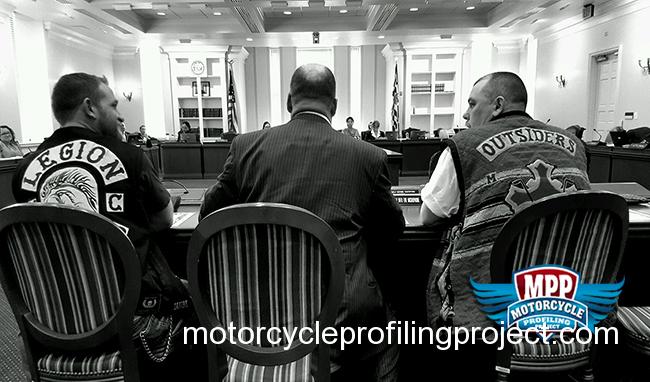 A bill to address motorcycle profiling is quickly moving through the state legislature putting Maryland on the threshold of becoming the second state in America to adopt a law to condemn and prevent motorcycle profiling.  SB0233 passed the Senate on a 47-0 vote on 3/3/2016 and now has been assigned to the House Judiciary Committee where 18 members, including the committee chair Delegate Vallario, are sponsors on the identical cross-filed House bill, HB0785. HB0785 received a public hearing on 3/10/2016 and was again unopposed by law enforcement. The final step in the process is nearing and passage by the entire House chamber seems likely considering that HB0785 has 62 delegate sponsors in total.

The hearing on March 10th was very well attended by the Maryland motorcycling community and many came from as far as Washington State.  As everyone gathered at the Navy Memorial Stadium in Annapolis, the sense of unity in the community was undeniable. Motorcycle club members and independents were responsibly assembling in order to protect their collective rights base by participating in the democratic process.

At 1pm the House Judicial Committee hearing room began to fill up. There wasn’t a single seat available.  It was standing room only with motorcyclists lining every wall. It was an impressive demonstration of grassroots manpower, impossible to ignore, magnifying the testimony of the two individuals selected by the community to testify in support of the legislation. 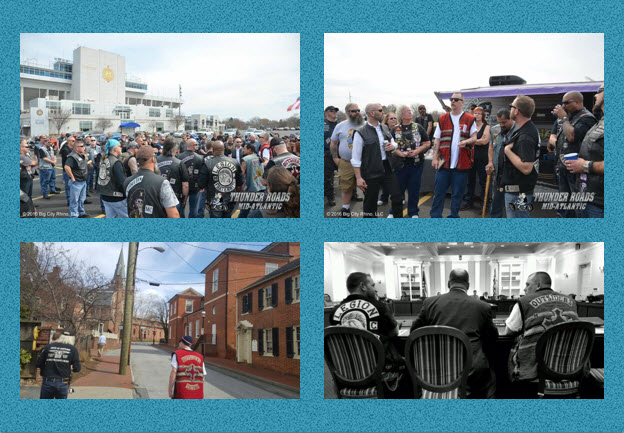 The Motorcycle Profiling Project, founded by David “Double D” Devereaux and Bill “Colt” Kaitz, was created for the purpose of replicating the successful process used to pass the first law addressing motorcycle profiling in Washington State. What’s happening in Maryland proves that both the policy and strategy promoted by the MPP, a movement based on grassroots manpower and unification, is highly effective at securing critical civil liberties for motorcyclists. So it was appropriate that Colt and Double D were chosen to testify and represent the community.

After the legislation was introduced by the primary sponsor Delegate Anderson, Colt began by outlining a persuasive pattern of evidence demonstrating that motorcycle profiling was common and pervasive in the state of Maryland. From mass profiling stops at the “Blessing of The Bikes” conducted under automatic weapon cover to multiple agency helmet pretext stops, the tangible evidence is irrefutable.

Double D was next, articulating the underlying Constitutional and fiscal implications of motorcycle profiling and testifying about the empirical success of this model policy first adopted in Washington State in 2011.  Simply put, this law is highly effective, has zero fiscal impact and does not impact law enforcement’s ability to do their jobs.

The movement to end motorcycle profiling in America has gained momentum and the issue is becoming recognized as a legitimate policy issue in the eyes of legislators coast-to-coast. Every state that successfully passes laws condemning motorcycle profiling makes the next state’s success more likely. Washington State and Maryland utilized the exact same blueprint, from beginning to end, and that blueprint can be applied to your state greatly increasing the likelihood of success in the legislature. That, after all, is the primary reason that the MPP was initially created.