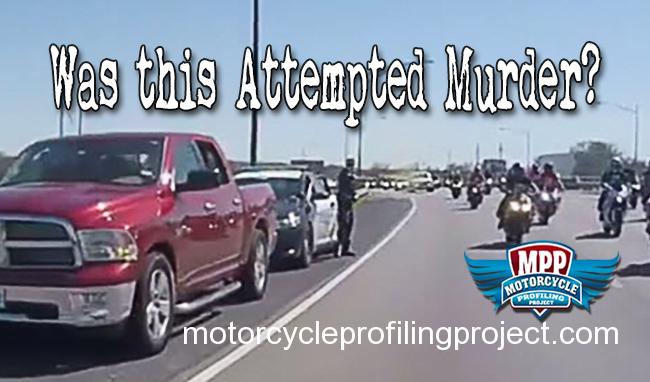 Many are familiar with the recent video depicting a Fort Worth police officer, now placed on administrative leave, pepper spraying a pack of motorcycles as they ride by. The bikes are forced to veer into another lane attempting to avoid being sprayed. This is clearly a case of officer negligence and excessive use of force. But could this be considered deadly force or even attempted murder?  Pepper spraying moving motorcyclists on a roadway could easily lead to serious injury or death.  This is just another incident in a well-established pattern of evidence justifying a law addressing motorcycle profiling in Texas.

The officer’s actions clearly fall outside the lines of legal behavior. It is not an officer’s job to punish suspects.  Suspects, even those arrested, are presumed innocent until proven guilty. Punishment in our criminal justice system is determined in the judicial arena, after an individual has been found guilty. So an officer’s use of force is confined to effectuating an arrest or detention or a threat to public safety or the officer.

An officer can use force in order to arrest or detain an individual. An officer may use only that force which is both “reasonable and necessary to effect an arrest or detention.” Anything more is excessive force. Payne v. Pauley, 337 F.3d 767 (7th Cir. 2003). Clearly spraying pepper spray at a pack of passing motorcycles is not reasonable or necessary. In fact, he had a truck detained at the time the motorcycles passed.

In fact, it was the officer that represented a threat to public safety and arguably was initiating deadly force. Although it’s true that pepper spray will likely not kill anyone, consider the totality of the circumstances. Motorcycles were moving in a pack on the roadway with many motorcycles and other vehicles. This officer attempted to spray the moving motorcycles with pepper spray which, if effective, creates a very high likelihood of an accident resulting in serious injury or death.

Was This Attempted Murder?

As commonly understood, “attempted murder is the incomplete, unsuccessful act of killing someone.”  In most jurisdictions, attempted murder charges consist of two elements: First, the offender took some action towards killing another person. Second, the offender’s act was intended to kill a person.

The first test has been explained. The officer took actions towards killing another person.  But the second test requires intent. The video shows the officer emerging from his vehicle with spray canister in hand and he deliberately points it towards the moving motorcyclists and begins spraying. The well-known effects of pepper spray are debilitating and extreme. Pepper spray causes intense pain, burning, and even loss of vision. An accident would have been more than the probable outcome if the officer’s attempts were successful. Indeed, an accident would have been highly likely. What other outcome other than serious injury or death did the officer hope to achieve?

Motorcycle profiling is an epidemic in America and Texas is no exception. The pattern of evidence is undeniable. In addition to this incident, consider the undisclosed settlement after Chris Moore sued authorities for $1 million dollars after falsely arresting Moore and using excessive force when arresting him. And let us not forget Waco, where 177 individuals were mass arrested with no individualized probable cause, just generic cookie cutter warrants, and all given $1 million dollar punitive bonds to send a message. Representing profiling on a massive scale, the commonality of those arrested was membership in motorcycle organizations and clubs.

Legislators in the state of Texas should take note.  The model law adopted unanimously in Washington State in 2011, and now on the verge of being law in Maryland, is highly effective, has no fiscal impact, and does not impact law enforcement’s ability to do their job. What it does do is substantially reduce incidents of profiling. This in turn reduces the state’s exposure to civil liability, the current gross mismanagement of public resources currently being used to profile motorcyclists, and secures the rights base of nearly a million people in the state of Texas.