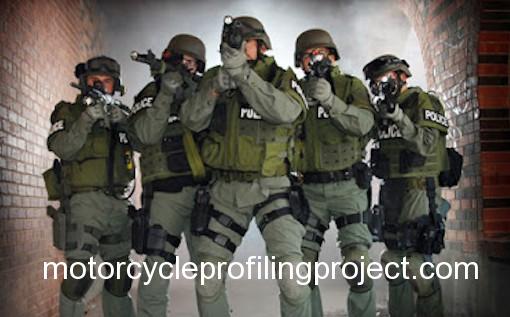 Everything from the rhetoric of law enforcement to the use of military grade equipment and weaponry suggests that law enforcement views themselves in an imaginary war. Imaginary in the sense that the war is absurd and one-sided. Motorcycle clubs are not stupid or psychotic enough to declare war on law enforcement. Regardless of reality, this illusion can too easily spark violent tragedies triggered by excessive force.

Logically, the mindset involved in militarization is completely different than the mindset involved in community policing in a free society. This is why we have the Posse Comitatus Act of 1878 which creates a barrier between military forces and domestic policing. It is only a matter of time before this mindset driving the goals and tactics of over-militarized police units results in more large-scale tragedy.

Military training and weaponry is designed to win wars. The way wars are won involves killing the enemy and containing any potential threat through the use of overwhelming firepower. There is no room for the enemy to enjoy Constitutional rights when at war. The goals and tactics of militarized forces at war are very different than the goals and tactics of domestic policing in a free society constrained by Constitutional rights of citizens that are not considered enemies.

These realities are substantiated in the ACLU’s recent report on police militarization, “War Comes Home.”

“The images on the news of police wearing helmets and masks, toting assault rifles, and riding in mine-resistant armored vehicles are not isolated incidents—they represent a nationwide trend of police militarization. Federal programs providing surplus military equipment, along with departments’ own purchases, have outfitted officers with firepower that is often far beyond what is necessary for their jobs as protectors of their communities. Sending a heavily armed team of officers to perform “normal” police work can dangerously escalate situations that need never have involved violence.”

“The change in equipment is too often paralleled by a corresponding change in attitude whereby police conceive of themselves as “at war” with communities rather than as public servants concerned with keeping their communities safe…We should not be able to mistake our officers for soldiers.”

Of particular concern is the irrefutable fact that Post-Waco profiling is escalating out of control and police are embracing overwhelming militarized forces as their primary policing tactic. An incredibly timely example of military style equipment and tactics being used against motorcycle clubs, American citizens, was carried out by a heavily militarized multi-agency force in Pocatello, Idaho this past weekend.*

Based on publicly unsubstantiated information subjected to zero scrutiny, a heavily militarized multi-agency force blockaded and harassed, with overwhelming force, hundreds of motorcycle club members and independents at an annual POW/MIA event.

There were no arrests and there had NEVER been a problem in the events long history, including the clubs present this year. Event organizers confirmed that there had never been a single problem with any of the clubs in the past, including the stereotyped and overly scrutinized 1% clubs, and they had an open line of communication with them.

But law enforcement, in their own words, “lit them up” anyway, blockading all patrons inside, cordoning them off with military style equipment and weaponry. There was no attempt to conduct rational community policing or communicate. This is true even though event coordinators made it perfectly clear that there has always been an open line of communication with the clubs present.  The police explicitly admit that their mindset was a militarized show of force to prevent a fictitious problem before it occurred, regardless of the undisputed history of peace and communication with clubs.

The use of militarized police to control the citizenry is irrefutable proof that we are moving towards a police state. How far will citizens allow this to go before they unite and use the democratic process to prevent totalitarian police tactics and the use of military style vehicles and weapons designed for war and not community policing?  Hopefully it will not take more death, tragedy, and massacre.

The Motorcycle Profiling Project is dedicated to promoting unity among all motorcycling organizations and clubs for the purpose of using our manpower in the democratic system to reverse this trend of militarized policing against marginalized communities and grassroots political factions. The Motorcycle Profiling Project can provide hands-on assistance mobilizing your community in order to pass meaningful and effective legislative solutions to combat motorcycle profiling, including militarized policing.

Anyone familiar with the Motorcycle Profiling Project knows we do not engage in conspiracy theories.  Unfortunately, the increasing militarization of American law enforcement is not a theory, it is fact. It’s imperative that currently unaffected Americans watching these events from the comfort of their living rooms wake up before the slippery slope reaches them. By then it will be too late and we will live in a totalitarian police state ruled through force and fear.