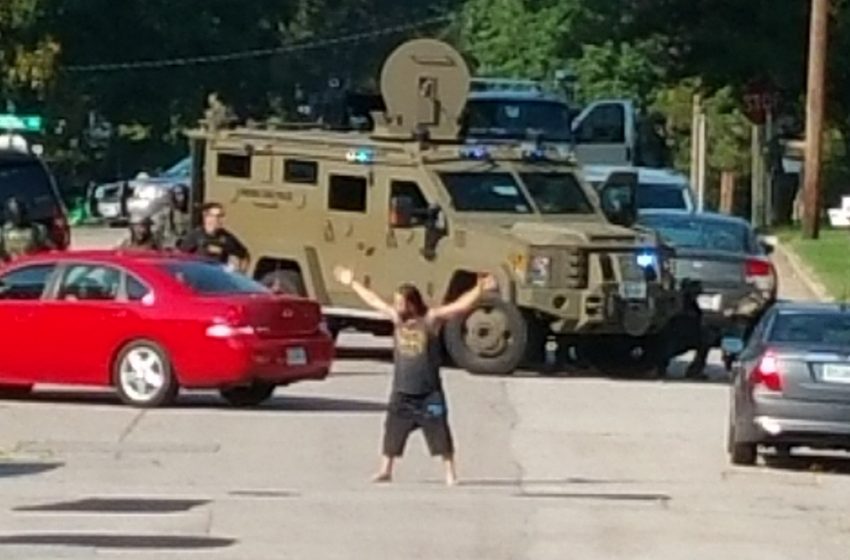 On July 24 the Virginia State Police conducted an unconstitutional and over-militarized search and seizure of the Wicked Few Charity Brotherhood in Virginia. According to NBC News, “families watched armored vehicles move into position Friday evening, investigators from Virginia State Police executed a search warrant inside a motorcycle clubhouse, leaving residents with few clues as to the goal or intent of the sweeping search.” (NBC News, July 24, 2015) After two hours and no arrests, the VSP seized club property and then pointed AR-15’s directly at an unarmed member as he requested to see the warrant. The request was denied.

The VSP operation was more reminiscent of a military operation than a domestic police action. Armored vehicles, AR-15’s, drug dogs, and after searching for more than two hours troopers made no arrests. Consider the following description from the primary witness on the scene.

“I felt like I was in Iraq and an IED has just been found,” said Jeremiah Dabney in an interview Friday. “We watched them in and out of our house. They brought drug dogs out. They searched the property, kicked the doors in.”

But after floorboards were pulled off, and safes cracked open, Dabney said he approached troopers to ask what was happening.

Troopers refused to show the sealed warrant, and left the neighborhood. “According to members of the social club, investigators took three biker vests, a large banner displaying the organization’s name, and a photo album.” (NBC News, July 24, 2015)

The level of militarization displayed by the VSP is unjustified and completely inappropriate considering the known circumstances. The Wicked Few Charity Brotherhood, as the name makes clear, is a charitable social organization. The Wicked Few are a new club that has only been around for two years. According to previous interviews, the club is completely dedicated to charity and community involvement. It’s a requirement of membership. Other than inaccurate stereotype, there is absolutely no apparent circumstances justifying a militarized response.The over-militarization of American law enforcement is an obvious reality with potentially devastating consequences. Militarized police eliminate any chance of community policing by installing fear and mistrust in average citizens. As the relationship between law enforcement and the community breaks down there is a much higher probability of unjustified use of deadly force and civil liberty violations on a massive scale. This breakdown also erodes the safety net that has irrefutably led to mass demonstrations and even violent rioting.

The response should be commensurate to the threat. And what we know about this incident reveals no justifiable threat.  And refusing to reveal the sealed search warrant is a mechanism that law enforcement is increasingly using to circumvent the constitutional requirement to demonstrate probable cause required in legal search and seizures.

The government’s most recent strategy involves motions to seal search warrant affidavits. Despite the fact that there is no statutory authority and precedent concluding the unconstitutional nature of sealed search warrants, prosecutors have often persuaded judges to continue the secrecy of search warrant affidavits long after the warrants have been executed based on the argument that unsealing would compromise an ongoing investigation.

Although initially sealing a search warrant may arguably preserve investigatory integrity, the moment that property is seized the search warrant must be unsealed.  David F. Axelrod, a former an Assistant U.S. Attorney for the Southern District of Florida and Trial Attorney for the U.S. Department of Justice says, “Until the application has been unsealed, it is impossible to identify any but the most obvious defects in the warrant or its execution. In particular, it is impossible to determine whether there was probable cause to search and, if so, for what.”  (see Litigating Sealed Search Warrants: Recent Cases Limit Indefinite Seal in Pre-Indictment Investigations)

The Virginia State Police acted unconstitutionally the moment that they seized the Wicked Few’s property and refused to show the warrant.  Sealed search warrants become particularly problematic after property is seized. Federal Criminal Procedure “clearly establishes the right of a person aggrieved by the execution of a search warrant to challenge the propriety of the seizure of his property. The subject of the warrant suffers the deprivation of property and has more than just an academic interest in knowing the basis for the warrant. Without the affidavit, it is impossible to assess the legitimacy of the warrant, and, therefore, the deprivation of property.”

Unless the search warrant application is open to review, counsel and the property owner cannot evaluate whether the affidavit is based on false or erroneous information. There is zero basis for the Wicked Few to challenge the taking of their property.

The denial of access to a warrant affidavit precludes a property owner from the most effective forms of challenging the warrant, depriving the property owner of procedural and substantive due process. “[M]inimum due process requirements are violated when a government agency permits its officers to carry out a seizure . . . without providing the owners any meaningful opportunity to challenge the seizure at the earliest possible time.”

Recent case precedent confirms that sealed search warrants were not intended by Congress. In the Southern District of Ohio (889 F. Supp. 296 (S.D. Ohio 1995) the court was clear that asserting an “ongoing criminal investigation,” is not enough to justify continued sealing. Criminal procedure “nowhere provides for the secrecy of warrant applications. This stands in sharp contrast to Fed. R. Crim. P. 6(e), which explicitly provides for the automatic secrecy of grand jury materials. The failure to include such a secrecy provision in Rule 41 is a plain indication that Congress did not intend for search warrant applications to be kept secret.”

The epidemic of over-militarized and discriminatory law enforcement actions targeting motorcycle clubs are perfectly demonstrated by the actions of the VSP.  The Wicked Few, a charitable organization, are victims of an over zealous and constitutionally unconscious search and seizure, conducted by armored vehicles, at the end of AR-15’s.  The pattern of evidence justifying legislative protection against law enforcement profiling is self-evident.

Every American should be highly concerned. The Virginia State Police must be held accountable. Every instance of over-militarized, abusive, and unconstitutional search and seizures erodes the concept of Due Process and risks large scale violence, unjustified deadly force, and a general breakdown of peaceful civil society.