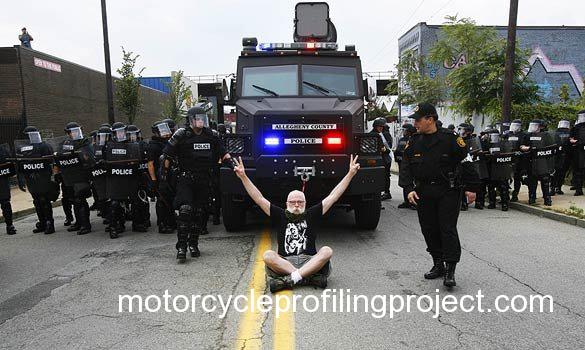 “The means of defense against foreign danger, have been always the instruments of tyranny at home.”

The use of military style policing has become a primary tactic law enforcement is employing to target and profile the motorcycle club community coast-to-coast.  Consider recent events in Waco, Virginia, California and Idaho. This trend is irrefutable. (see Police Have Declared War On Motorcycle Clubs: Is Another Biker Massacre Imminent?  and Virginia Police State: No Motorcycle Club is Safe)

And the problem is not confined to motorcycle clubs and the poor. Police militarization is a reality in most corners of America. In the words of  The Free Thought Project:

“In the 1970’s SWAT teams were estimated to be used just a few hundred times per year, now we are looking at over 40,000 military style “knock and announce” police raids a year. The problem of police militarization is a legitimate threat to the very fabric of a free society.  We are now witnessing the horrible manifestations of this standing army that has been built up around us in the name of throwing people in cages for their personal choices.”

“This problem has been staring us right in the face for a long time and up until now, has been being largely ignored.  However, the elephant in the living room has caused so much damage that even the mainstream media is now being forced to cover it.  Because of people out there like you, that share these atrocious stories of police violence, this conversation is being forced into the public debate.”

Most sane Americans would agree that such violent tactics used to enforce non-emergency police work for the sake of sending a political message is simply deplorable. The problem is clearly established. It is now important to discuss solutions to a problem that is impacting American citizens on a national scale.

The Motorcycle Profiling Project is based on the idea of uniting a community at the grassroots level for the purpose of using the “power of people” to influence the democratic process to advance the civil liberties of motorcyclists. The power of the grassroots motorcycle rights movement in states like Washington prove that responsible democratic movements can effectuate tangible change.

For example, the prohibition against motorcycle profiling in Washington State, passed unanimously in 2011, was a direct result of a united grassroots community. And this policy has resulted in a dramatic 90%+ reduction in profiling incidents statewide, and gives the community a tool to fight future abuses.

The issue of police militarization can be combated the same way.  A united grassroots effort across all impacted communities could effectively secure relief in state legislatures across the country, and eventually the U.S. Congress. The issue of police militarization is a common ground issue across society and an issue that terrifies most Americans.

It’s time to fight back by utilizing the democratic process to secure our eroding base of civil liberties. The movement to end police militarization should be a powerful and broadly diverse grassroots political movement advancing actual change and proposing actual legislation and policy.

The following proposal drafted by the Motorcycle Profiling Project is a simple and virtually cost-free approach to reduce militarized police operations. The proposal requires every law enforcement agency in the state to adopt a written policy statement, implement restrictions on the use of SWAT or other military-style teams, and prepare a simple annual report detailing the use of SWAT or other military-style teams. These requirements were formulated based on research and suggestions from experts in the field, including former law enforcement officials that have since chosen to speak out against police militarization.

A Proposal To Reduce Police Militarization in America.

BE IT ENACTED BY THE LEGISLATURE OF THIS STATE:

NEW SECTION Sec.1 Every state and local law enforcement shall;  (1) adopt a written policy to condemn and prevent the militarization of law enforcement, defined as the use of SWAT or other paramilitary teams (police equipped with military grade or military style weapons, equipment, and clothing) for any enforcement action that is not based on reasonable suspicion or probable cause establishing that a violent crime is in the process of being committed, or is likely to be committed imminently without police intervention.

(2) restrict the use of SWAT teams, or other paramilitary police teams, to those rare emergencies in which there is reasonable suspicion or probable cause establishing that a violent crime is in the process of being committed, or is likely to be committed imminently without police intervention.

(3) issue an annual report detailing each use of SWAT or other paramilitary teams. This annual report should detail the purpose of the operation, the reasonable suspicion or probable cause establishing violence or the imminent threat of violence, the number of officers involved, the equipment/weapons/gear utilized in the operation, what the searches found, whether any shots were fired, by whom shots were fired, whether any individual was injured or killed, whether those injured or killed were civilians or law enforcement.

Identifying any problem is the first step in the process of solving it. The issue of militarized policing has been clearly established and impacts Americans in their everyday lives. Military-style policing turns otherwise non-violent situations into a powder-keg for violence and massacres. But the solutions have not received enough focus.

It’s time to unite all elements of America impacted by militarized policing and use “people power” to demand tangible legislative change. Both the mindset and practices of militarized police forces must change to reflect the demand that policing maintain the purpose of protecting those they serve. Not turning us all into enemies.

*source: Free Thought Project, The Militarization of Police Has Gotten So Out of Control Its Captured the Attention of the MSM, By Matt Agorist, June 29, 2014