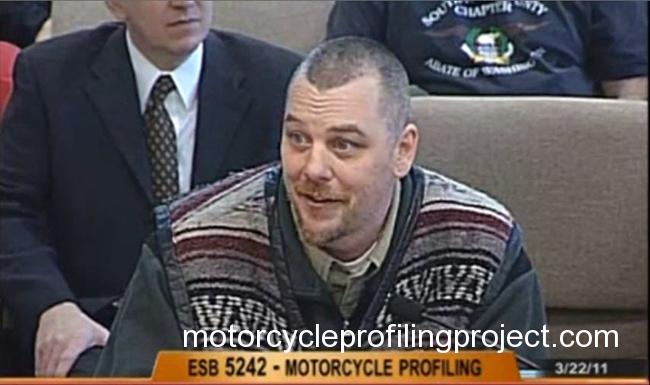 The Motorcycle Profiling Project is not anti-law enforcement so much as it is pro-civil liberties and police accountability. Law enforcement is an essential element of any civilized, peaceful, and free society. There will always be bad people and crimes against innocents. Society must endow law enforcement with the power to truly protect and serve their communities.  Unfortunately, power can easily be abused and discriminatory stereotypes often underlie abuses of discretion. So while it’s true that law enforcement must be granted extra-ordinary powers to enforce the law, it is equally true that that power must be regulated by the legislature and the courts to insure that ideologies driving law enforcement are not discriminatory or unconstitutional.

Representative Christopher Hurst, Chair of the Public Safety and Emergency Preparedness Committee in 2011, sponsored the bill after becoming aware of the issue the previous session. Representative Hurst served as a police officer for 25 years before he retired to pursue a career in the legislature. Representative Hurst recognized the issue when he was an active officer and believed that a simple policy and training was important to make law enforcement a more effective and accountable entity.

Representative Brad Klippert, an active duty officer from a conservative district in eastern Washington, opposed the bill in 2010 over concerns that it would unduly restrain officers from doing their job. In 2011, after a fully developed pattern of evidence was presented that could not be denied, Representative Klippert supported the bill by voting yes in both committee and on the floor.

When a legislator (even one with a law enforcement background) is exposed to blatant abuses driven by an inaccurate and overly broad stereotype their reaction may surprise you. Most legislators understand that one of their primary responsibilities is to manage the relationship between law enforcement and the community. Eliminating stereotypes in policing shifts law enforcement’s focus from appearance back to behavior, a far more effective indicator of criminal activity.

Reducing discriminatory policing actually improves the relationship between police and the citizenry they are intended to serve. Focusing on behavior will improve the ability to detect criminal behavior that may be missed when distracted by unreliable indicators like appearance. And, of course, discriminatory policing represents a gross mismanagement of public funds and risks mass civil liability exposure. Proper and inexpensive training is clearly a cost-beneficial solution.

In the end, the MPP is not anti-law enforcement at all. Rather, the MPP promotes police accountability through policy solutions that reduce abuses of discretion and improve law enforcement’s ability to truly protect and serve the community by focusing on actual criminal activity. There are a multitude of laws to prosecute and deal with bad apples in the biker community.  Justice demands that the law reciprocate by protecting victims of discrimination at the hands of bad or improperly trained cops.

See an example of Anti-Profiling Support within the legislature: