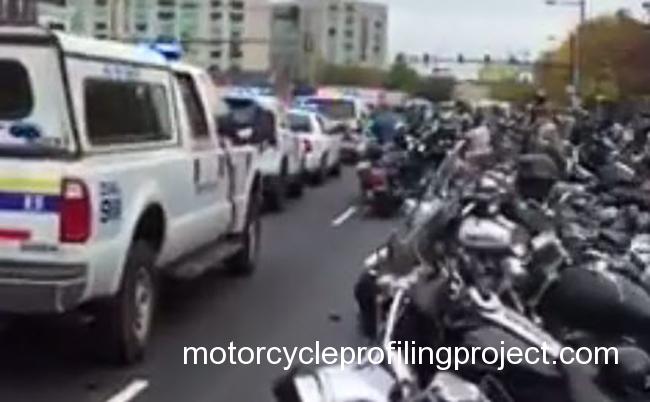 On November 1st the Philadelphia Police Department blockaded the Pennsylvania Confederation of Clubs and prevented them from participating in the annual ABATE of Delaware Valley Toy Run. This blockade was an unconstitutional infringement on an entire class of people based on protected expression. This incident further solidifies an already overwhelming pattern of evidence demonstrating that profiling is an epidemic in Pennsylvania. Pending legislation, Pending legislation (HB1580) mandating simple policy and training requirements, empirically proven effective, should urgently be approved.

The truth about the Philly Toy run on November 1st has been hard to come by because there are so many competing rumors and so much social media chatter. Some say ABATE asked that police blockade motorcycle clubs. Some say that they were allowed to participate, just not ride at the front of the pack. But after communicating with eyewitnesses from the COC and ABATE of Pennsylvania the truth is quite clear and irrefutable.

As described in a letter written by an active member of the Eastern Pennsylvania COC, the Confederation of Clubs was selectively targeted, blockaded, and prevented from participating in the Toy Run based on appearance and stereotype. There was no reasonable suspicion to believe that violence or crime would occur.

On November 1, 2015 my club, Responders EMS MC, and many other clubs of the Eastern PA COC lined up at Columbus Boulevard and Spring Garden St. for the 35th Annual ABATE of Delaware Valley Toy Run “For the Kids”. I arrived at about 0930 and there were about 50 bikes already parked.  The Philadelphia Police Department, and possibly other federal agencies, were staged in the median of Columbus Boulevard taking pictures of everyone who arrived.

My club and I walked the length of the parade and back, and witnessed nothing out of the ordinary.  There was no violence, no intimidation by any clubs or independent riders.  I stayed at the front of the staging area of the parade, where I parked by motorcycle, from approximately 1015 until the beginning of the parade.

Around 1150 or so, I noticed quite a few of the Philadelphia Police vehicles moving along the front of the parade.  I did not pay this any attention as I figured they were preparing to block traffic for the large amount of motorcycles that take part in the toy run.  At about 1155 I was told we were blocked in by the police, with no means of getting around them.  At 1159 I began video recording the length of the blockade on my cell phone.  No police officer gave any indication as to why they were not allowing us to participate in the toy run.

The COC clubs and their guests, about 200 or so bikers, were held in excess of 30 minutes until the length of the parade was gone.  Once the parade had left, the blockade was lifted and we were able to proceed.   The police then directed which way we were allowed to go.  The parade travelled west on Spring Garden St., which the police had blocked.  They directed us to go south on Columbus BLVD, which is away from the toy run route.

This felt like a blatant violation of my, and our, 1st and 4th amendment rights.  The police decided we were not welcome to participate in the toy run, even though the president of Delaware Valley ABATE personally invited the COC clubs to attend, simply based on our collective association with Motorcycle Clubs.  We were detained for a length of time against our will, and unable to donate the children of the Philadelphia area.

So what do the police say?  Why the blockade? In an email from the Philadelphia Police Department to a well known biker social media site “2 Million Bikers To D.C” the PPD asserts that the event organizers requested the assistance to prevent a “Diamond Club” from ruining the toy run and taking it over.

Great page friend, but the post on the Philadelphia police blocking patches is wrong! The run was sponsored by abate, over the years,( the last three) a certain group of diamond club members, and their puppet clubs, would park and gather and put to work their security members near the front of the event. Then when it’s real close to the time to leave, that diamond club, would jump to the front, and lead as though they were running the event. The people who organized this event have been complaining about it for years. So this year, the pd, blocked them until after the real organizers, and Santa left, started and lead the event. The diamond club was then allowed to join the ride, but were pushed to last. No plates were run, no bikes were checked.  Thought you would like to know.

But these assertions about ABATE requesting police assistance are simply untrue. The hosting Delaware Valley ABATE Chapter has, in a letter written by their President, confirmed that the COC was indeed invited and that ABATE had no knowledge of the police blockade. This was an action taken by an agent of the state and not on behalf of the hosting organization.

DEL VAL ABATE [the event host and organizer] did not have any knowledge nor do we condone the actions of the police. The COC’s and 1% clubs were invited and welcomed by my chapter to attend. I personally did not find out about this until later in the day. I will do my best to handle this situation. if you have any questions feel free to contact me.

The actions of the Philadelphia PD are inexcusable violations of basic Constitutional protections. Blockading a group of motorcycle clubs and preventing free movement without reasonable suspicion of criminal activity is an unreasonable seizure in violation of the 4th Amendment. Preventing participation and selective targeting based on legal associations and expression is a clear violation of the 1st Amendment. The COC is a political organization and they were attempting to participate in an event to benefit needy children. The actions of the police were abhorrent. There really is no argument or defense.

The pattern of motorcycle profiling at the hands of law enforcement in Pennsylvania is obvious, widespread, and pervasive. All Americans and citizens of Pennsylvania should be concerned. Fortunately there is a possible solution that will reduce these incidents in Pennsylvania and provide motorcyclists with a tool to deal with incidents like this that do occur. HB 1580, currently in the PA House of Representatives, is an empirically effective policy solution that has been shown to reduce motorcycle profiling incidents substantially. Requiring basic written policies and training, HB 1580 is a virtually cost-free solution that is being driven by the unified grassroots efforts of ABATE and the COC in order to protect rights to freedom of expression and association without enduring police harassment and discrimination.

See the video of the police blockade on the Motorcycle Profiling Project Facebook Page.