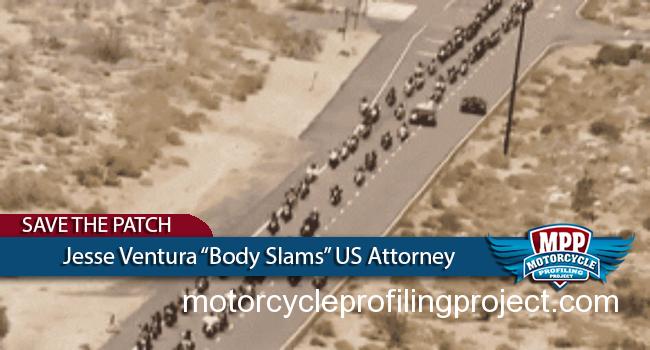 As the trial for the Mongols Motorcycle Club patch that began with jury selection on October 30th, 2018 continues, 1 the far-reaching implications cannot be overstated both in terms of potential impacts on motorcycle clubs in America, and the First Amendment to the US Constitution. A trial observer that wishes to remain anonymous has reached out to the Motorcycle Profiling Project to report that attorney Joseph Yanny is waging a vigorous defense on behalf of the club.  Specifically, former Minnesota Governor and Mongols MC member  Jesse Ventura, while on the stand for the defense on November 28th, 2 left US Attorney Welk “visibly annoyed, shifting in his chair, and fake-smiling with a beat red face,” states the observer.

US Attorney Welk first asked former Governor and longtime Mongols member Jesse Ventura a question about the Constitution.  “Mr.  Ventura strongly and boldly responded: “I believe this trial is ridiculous because of the First Amendment.” Shocked, the US Attorney stumbled on a motion to strike the answer, and the judge denied it. The answer stood,” reports the trial observer.

Sounds like Mr. Ventura believes what most people with this case believe, and it sounds like he has a good grasp on 1st Amendment protected expression and association. And by the motion not being stricken, maybe this indicates that Judge Carter agrees?

“Trying  to do damage control, the US Attorney asked a follow-up question about fairness by  law enforcement, and Governor [Ventura] gave a brilliant and eloquent speech, using a clear example of tyranny from those oﬃcers that abuse their power. Everyone in the courtroom then sat reverently, pondering in silence while the US Attorney bustled to figure out how to change the subject. So powerful,” according to the trial observer.

And how did US Attorney Welk respond? According to the trial observer, “the US Attorney is  now sitting red-faced, and looking like an embarrassed kid that was just spanked in front of his friends.”