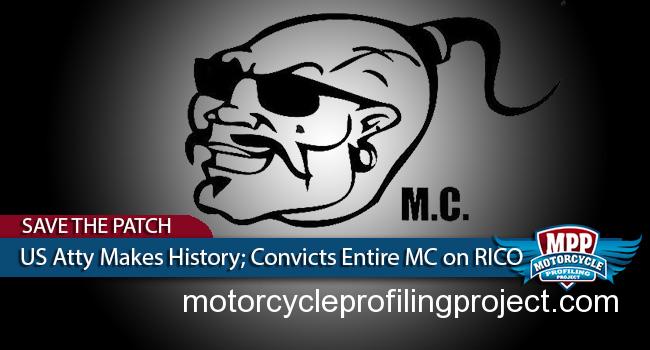 For the first time in history, in its latest bid to seize the Mongols Motorcycle Club’s logos and collective membership marks, the federal government has successfully indicted the Mongols Nation as an entity comprised of every single full-patched member of a motorcycle club, on felony RICO racketeering and conspiracy charges regardless of personal guilt.

So, what happens next? What does this verdict mean for the Mongols MC, other motorcycle clubs in America, and the First Amendment to the US Constitution? There are definitely more questions than answers. But one thing is certain. The fight to Save The Patch is far from over. Now, more than ever, motorcycle clubs have a critical issue to mobilize around in order to preserve and insure the survival of a lifestyle and a culture.

No one goes to jail?

Despite a verdict of guilt, no one will be incarcerated as a result. The crimes cited are historical and, in many cases, resolved. The goal here is diﬀerent. The government maintains that the club’s insignia and patches are an element of the criminal enterprise and a tool of intimidation. If the government gets its way during the sentencing phase, prosecutors argue they will literally be able to take the colors off a Mongol’s back.

The implications for the motorcycle club community at large are obvious. The federal government’s forfeiture strategy could ultimately be applied to other clubs in an attempt to crush the symbolism that defines association in motorcycle clubs. And completely independent of forfeiture, the idea that an entire motorcycle club can be defined as a criminal enterprise regardless of personal guilt also lays the foundation for other severe sentencing options such as excessive fines and asset forfeiture.

Personal guilt and the 1st Amendment.

Beyond immediate impacts to the Mongols MC, the US Attorney’s theory of prosecution compromises important judicial principles such as the doctrine of personal guilt, guilt by association, and the fundamental concepts of First Amendment Association and Expression. Indeed, the prosecution’s theory obliterates long-standing constitutional principles.

To permit the government to impose restrictions on any person “who wears the insignia of [the Mongols], without regard to or knowledge of that individual’s specific intent to engage in the alleged violent activities committed by other members, is antithetical to the basic principles enshrined in the First Amendment and repugnant to the fundamental doctrine of personal guilt that is a hallmark of American jurisprudence.” 1

Independent of collective membership mark issues, and even though no one is going to jail as a result this verdict, what are the potential implications of the Mongols Nation- meaning every member of the Mongols MC- being found guilty of two felony RICO counts? No individual person is specifically named in the indictment. But every member they want to seize property from must be an indicted individual in order to avoid the same judgement that gave the Mongols back their property initially.

These questions, at least to the MPP, remain unanswered. So much focus has, understandably, been placed on the patch forfeiture issue that many of these questions haven’t yet been considered by those discussing and writing about this case.

The US v. Mongols Nation Trial, despite a guilty verdict, is still a long way from being over. After the first of the year, the jury will reconvene, enter the sentencing phase, and decide whether they agree with the government’s forfeiture requests. And even if the jury grants forfeiture, Judge Carter must then adjudicate the extensive legal and constitutional objections to forfeiture.

Fortunately, even if unsuccessful in every phase of this federal district court trial, the Mongols MC can appeal the decision as they previously did when they lost their patch in district court before overturned on appeal. Unfortunately, there is no guarantee what will happen in the interim if the Mongols marks are seized. If history repeats itself, the Mongols MC will be targeted, harassed, and have property and colors seized by authorities.

Make no mistake. This is NOT just about the Mongols MC. In a very real way, the motorcycle club lifestyle is under heavy attack and survival is not assured. This verdict demonstrates that reality. So, the community must not only continue to fight the good fight- the community must win.