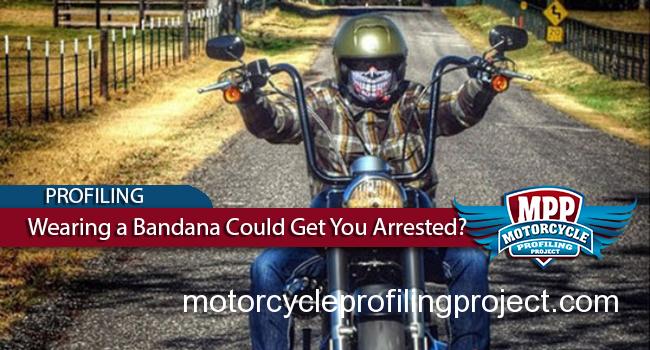 Louisiana motorcyclists in the Bossier/Shreveport area may be experiencing a mechanism of profiling that many are unaware of. It has been reported to the MPP that 17 motorcyclists in the area have recently been arrested for wearing bandanas, scarves, and even a bubble shield while riding because it conceals their identities in public. Local law enforcement contends that covering your face in public is a violation of Louisiana’s anti-mask law, LSA-R.S. 14:313, which carries a 6 month to 3 year term of imprisonment. Although every incident has not been confirmed, the MPP spoke to one motorcyclist directly and confirmed that he was arrested for concealing his identity on November 8, 2016.

The law used to justify targeting motorcyclists for wearing masks in Louisiana exists elsewhere. At least 15 states have what experts call “general anti-mask laws” that could be applied to motorcyclists. Applying anti-masking laws to motorcyclists covering their heads and faces with protective gear is an abuse of statute and demonstrative of motorcycle profiling. An exemption for public safety ought to be obvious.

While visiting Louisiana to attend and speak at a state Confederation of Clubs and Independents meeting in Alexandria, the MPP became aware of the alleged arrests for concealing identities in public. The MPP spoke to a member of a motorcycle club in the Bossier/Shreveport area that was able to confirm the validity of the rumors.

Although a traffic pretext was used to justify the stop, the MPP evaluated his citation and he was indeed arrested for concealing his identity, an alleged violation of state code LSA-R.S. 14:313.  This individual  was on his way to vote in the 2016 National Election. He was denied this opportunity. He was forced to pay a bond in order to obtain his release and as of this writing the issue has not yet been resolved.

(Notably, this same individual has been experiencing a pattern of harassment while riding his motorcycle. 9 days after the mask arrest he was again stopped and harassed for a series of pre-textual infractions preceding more questions about his club affiliations.)

No person shall use or wear in any public place of any character whatsoever, or in any open place in view thereof, a hood or mask, or anything in the nature of either, or any facial disguise of any kind or description, calculated to conceal or hide the identity of the person or to prevent his being readily recognized.

Whoever violates this Section shall be imprisoned for not less than six months nor more than three years.

This Section shall not apply:

Originally the Louisiana law against wearing masks and hoods in public was motivated by the Ku Klux Klan wearing hoods and masks concealing their identity while they terrorized and intimidated others.[1] Louisiana’s law makes exemptions for Halloween and Mardi Gras, but none for public safety. Although clearly not the intent of the law, motorcyclists covering their faces to avoid bugs, wind, and rain may be subject to arrest.

Some states that have similar laws have anticipated such conflicts and include an exemption for safety or sporting activities in their anti-mask statutes.[3]   But 15 states, including Louisiana, have more general statutes that could lead to these abusive applications.[4]    In fact, “general anti-mask laws proscribe the simple concealment of physical identity in public, regardless of coexistent criminal activity. Individuals have been prosecuted under general anti-mask laws for wearing a Ku Klux Klan hood, for dressing in the clothing and wearing the makeup of the individual’s opposite sex, and for placing a leaflet between the individual’s face and eyeglasses.”[5]

Numerous strategies may exist to combat anti-mask laws being applied to motorcyclists. Judicially, filing for a Declaratory Judgement arguing that the statute is unconstitutional is another option, although this has been attempted and has not always been successful.

“The conflicting court decisions, along with the varying scope of anti- mask laws themselves, reflect the uncertainty concerning when, if ever, the government can constitutionally ban public mask-wearing. Further complicating this area of the law is the apparent political bias of some of the courts that have ruled on the challenges.”[6]

Legislatively, an anti-motorcycle profiling law would eliminate discriminatory pretext stops at the source. Also, adding an exemption to state statute for safety and sport, including motorcycling, would prevent abuse and preserve the original intent of the law.