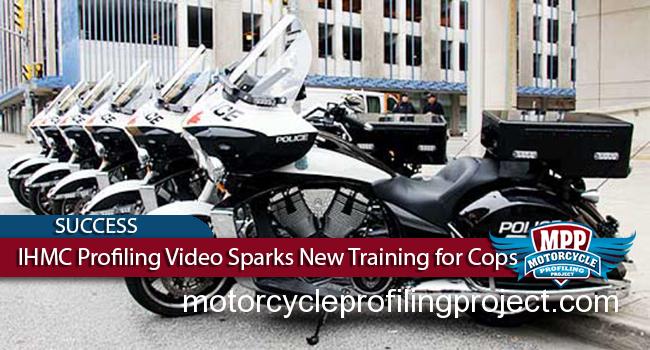 While attending the 2017 Biketoberfest rally in Daytona Beach, Florida, members of the Iron Horsemen Motorcycle Club (IHMC) were the target of blatant profiling and discrimination at the hands of the Daytona Beach PD. The incident, caught on videotape as a result of quick thinking, is irrefutable.

The impact on civil liberties motivated the combined efforts of the North Florida Council of Clubs (NFLCOC), the National Council of Clubs (NCOC), and the Motorcycle Profiling Project (MPP) to immediately respond with a formal complaint and public record requests. These inquiries, based on the video, have sparked an investigation into the actions of the officers involved and a review of Daytona PD policies regarding motorcycle clubs, says a source inside of Chief Craig Capri’s office. Already, as a result of the State Attorney’s inquiry, a curriculum is being constructed and all Daytona PD officers will be re- trained relating to motorcycle profiling. Activism works.

The Story Captured On Video

On October 20th, 2017, members of the IHMC, while walking down the street doing absolutely nothing wrong, were stopped and surrounded by Daytona PD officers and asked to produce identification. Why? Video captured by the IHMC reveals that the seizure and demand for identification was based solely on individuals wearing colors identifying membership in a 1% motorcycle club. In fact, Daytona PD officers explain on video that stopping and documenting motorcycle club members is standard department policy.

A member of the IHMC, exercising his constitutional right to film police in public, captured the entire event on video. Video can be irrefutable proof of wrongdoing in a case of motorcycle profiling. The video also served as the foundation for a successful complaint that is triggering review from within as well as by the state’s attorney. 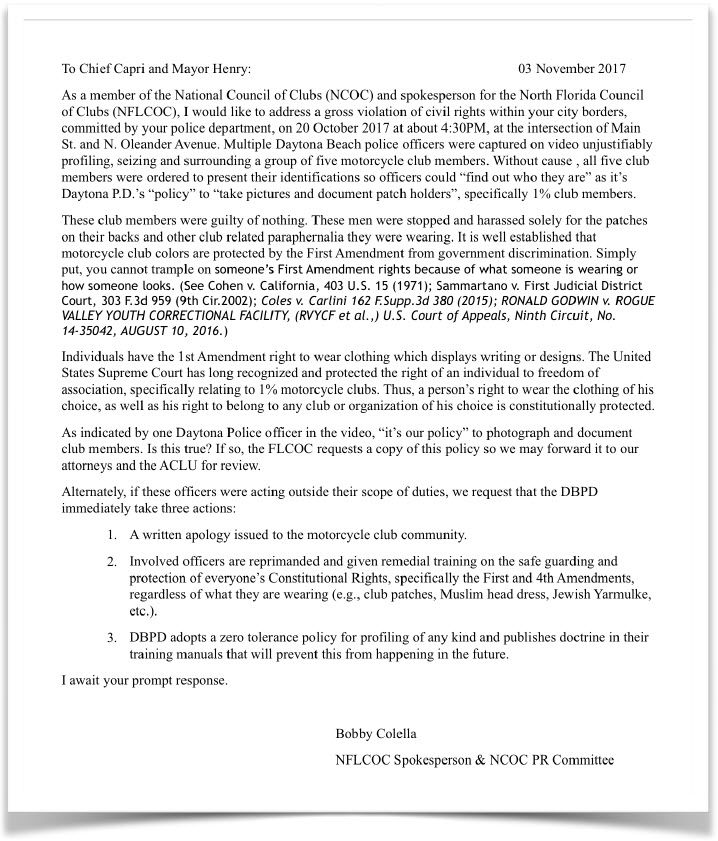 After reviewing the video provided by the IHMC to the MPP, Daytona Beach resident and patch holder Bobby Colella was in a unique position to combine the efforts of three entities focused on the same goal. Colella is a member of the NFLCOC, member of the NCOC PR Committee, and an MPP contributing author. Colella immediately drafted a complaint and sent it to the DPD Police Chief Craig Capri and Mayor Henry by email on 10/24/2017 and by certified mail on 11/03/2017. Colella followed the complaint with a public records request asking for any department policies related to motorcycle clubs or profiling and any records related to the event. Eventually he received a response from the DPD. Colella writes:

“On 11/15/2017 I received a phone call from Jessica Wolfflesnider, executive assistant to Daytona Beach Police Department (DBPD) Chief Craig Capri. Wolfflesnider stated that the video has been submitted to the Florida State Attorney’s office for review. Wolfelsneider also stated there has been an officer (Lt. McBride) assigned to internally review the video and work with the DA’s office throughout the review process.”

“Wolfflesnider stated that dependent on the findings of the state attorney, there could be several actions that occur, to include the officers being reprimanded and additional training being mandated for the officers involved in the 20 October incident, and possible adjustments to the department’s policies.”

On December 18, 2017 Colella received an update from the DBPD. Colella writes:

“Wolfflesnider reports that, in response to the video captured at Biktoberfest, the DBPD Training Department is now working in conjunction with the Florida State Attorney’s office to develop a curriculum to retrain all officers in the department.”

“Wolfflesnider also reported that there is an ongoing investigation being conducted by internal affairs relating specifically to the officers involved in an incident that occurred on October 20, 2017, captured on video by a member of the Iron Horsemen Motorcycle Club.”

This incident is a textbook example of how an effective grassroots movement can handle an incident of motorcycle profiling that occurs in the motorcycle club community.

First, the IHMC, from the beginning, made sure to capture the incident on video. The video is the critical piece of evidence referenced in all further developments.

Second, the video was released through grassroots media like the MPP and shared on social media, which resulted in thousands being exposed. Web media and social networking provides an alternative mechanism to communicate an effective message that is not reliant on traditional news media outlets.

Third, the Florida and National Council of Clubs utilized the video as the foundation for a complaint to the Daytona PD which has triggered an inquiry that has resulted in re- training an entire department and could result in reprimand and/or reform for officers caught profiling on the video.

It’s easy to say that things can’t be fixed or that profiling comes with the territory and has always been a problem for bikers. But fighting back using the democratic process and media that isn’t controlled by monetary motivations can help reduce profiling and secure the freedoms all people should enjoy.

The MPP will report any developments or updates.