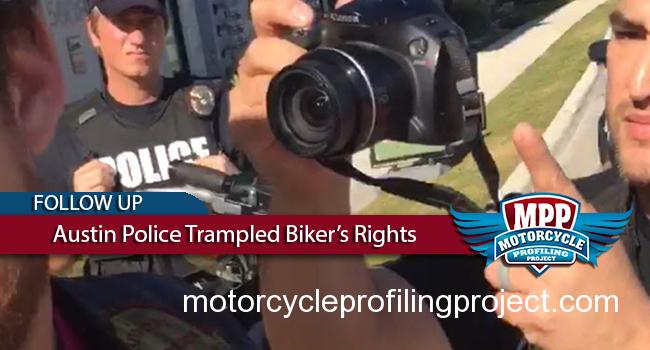 On Tuesday the 13th of December at approximately 1:15pm Cody King was the victim of a motorcycle profiling stop in Austin, Texas. Cody was stopped under the pretext of failing to properly signal while riding his motorcycle. But the real intent was to illegally detain Cody so they could violate his privacy without justification by taking pictures of tattoos all over his body. Most bikers and club members have a similar story about being profiled. But Cody went the extra step and recorded the entire incident, exactly what all bikers should do.

Why The Stop Is Illegal

Under federal law, the US Supreme Court recently explained exactly how the 4th Amendment works in terms of extending traffic stops for investigatory purposes beyond an investigation of the traffic infraction that justified the initial seizure. The majority in Rodriguez v. US (2015) writes:

“A seizure for a traffic violation justifies a police investigation of that violation” – not more — and “authority for the seizure . . . ends when tasks tied to the traffic infraction are – or reasonably should have been—completed…” Traffic stops have to be reasonably short, and unless there is reasonable suspicion of some other crime, officers can’t use the stop as a subterfuge for extraneous investigation.” 1

The extended duration of Cody’s stop amounts to a 4th Amendment violation. The moment that the APD officer confirmed that Cody would not be receiving a ticket, authority for the seizure ended because “tasks tied to the traffic infraction” were- “or reasonably should have been- completed…”

Extending the duration of the stop to take pictures of Cody absent “reasonable suspicion of some other crime” is unconstitutional “subterfuge for extraneous investigation.”

Independently, photo-stops violate an individual’s Fourth Amendment rights because an investigative technique must be “reasonably related” to the original suspicion that justified the stop. 2 Obviously, photographing Cody’s tattoos the investigative technique in this instance- is in no way “reasonably related” to the turn signal violation that justified the initial stop.

Cody Did Not Give Consent

The APD offered Cody an unreasonable choice after the traffic infraction was adjudicated. The APD was going to take pictures of Cody regardless of his consent. It’s clear that he was still being detained and not free to leave. Cody was only given the choice between pictures being taken on the side of the road or at the jail. Cody being forced to choose between two unreasonable options does not amount to consent.

Many comments on the MPP reveal that some believe membership in a club that authorities label a gang amounts to reasonable suspicion and even probable cause for conducting an investigatory stop. This argument is specious for numerous reasons.

First, Cody is in a motorcycle club and has no felonies. This proves being in a club does not make you a criminal. The facts of the specific case override generalized conjecture.

Second, Membership in motorcycle clubs, including clubs labeled organized or criminal gangs by authorities, is protected by the 1st Amendment.

There is “no evidence that by merely wearing [motorcycle club] “colors,” an individual is “involved in or associated with the alleged violent or criminal activity of other [motorcycle club] members. It is a fundamental principle that the government may not impose restrictions on an individual “merely because an individual belong[s] to a group, some members of which committed acts of violence.” In fact, the Supreme Court has long “disapproved governmental action . . . denying rights and privileges solely because of a citizen’s association with an unpopular organization.” Healy v. James, 408 U.S. 169, 185-86 (1972). 3

The Austin Police Should Have Known They Were Violating Cody’s Rights.

318.6.2  FIELD PHOTOGRAPHS TAKEN WITHOUT CONSENT Field photographs may be taken without consent only if taken during a detention that is based on reasonable suspicion of criminal activity and the photograph serves a legitimate law enforcement purpose related to the detention.

(a) The officer must be able to articulate facts that reasonably indicate that the subject was involved in, or was about to become involved in, criminal conduct.
(b) Mere knowledge or suspicion of gang membership or affiliation is not a sufficient justification for taking a photograph without consent.
(c) If, prior to taking a photograph, the officer’s reasonable suspicion of criminal activity has been dispelled, the detention must cease and the photograph should not be taken. 4

What appended to Cody is not isolated. Similar incidents have happened to thousands of bikers in Texas and across America. What happens too seldom is documenting these incidents. Filming the police in public is a constitutional right. Cody’s stop is not just an anecdotal story. Cody’s video is incontrovertible proof that motorcycle profiling is occurring in the state of Texas.