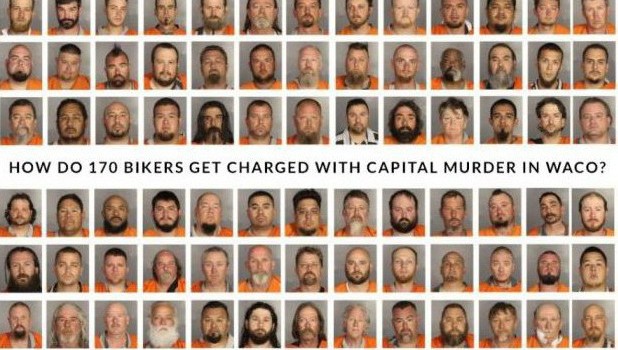 Why All Americans Should Be Concerned About Waco

“This is an issue that impacts core constitutional principles and the viability of the criminal justice system.”

To individuals unfamiliar with motorcycle clubs,

As a dedicated motorcycle rights advocate, I would like to take the time to write to individuals that know little or nothing about motorcycle clubs and have a conversation about how motorcycle clubs are being generally mischaracterized after the recent tragedy in Waco, Texas. The vast majority of the information circulating comes from those unfamiliar with the culture and is based on sensationalized and inaccurate media reporting. The tragedy is being used by many media and law enforcement sources as a justification for broader-based discrimination against all motorcycle clubs, regardless of the well established 1st Amendment freedoms of association and expression. This is not just a motorcycle club issue. This is an issue that impacts core constitutional principles and the viability of the criminal justice system.

To begin the discussion it is important for you to understand the source of my perspective. It is only fair that the reader be familiar with my experience and credentials in order to assess the validity of my claims.

I believe I am qualified to speak credibly about issues relating to motorcycle profiling and discrimination based on these experiences. As stated, most sources writing about motorcycle clubs have zero experience with actual club members, the COC, or apparently the foundations of the 1st Amendment to the U.S. Constitution.

Although many of the details surrounding the incident in Waco have not been revealed, one thing we do know is that most media, and many law enforcement agencies, are using the Waco tragedy to summarily judge and stereotype a class of hundreds of thousands of individuals based on the actions of a very few. Using the Waco tragedy to create fear risks trampling the foundational freedoms of association and expression for motorcycle clubs as a class. This should concern every American. Again, this is not just a motorcycle club issue. The freedom of association is an extremely important American right, it is not a privilege.

Misinformation is a primary component of propaganda and fear. The meeting in Waco was a well publicized political gathering of the Texas Confederation of Clubs and Independents solely intended to discuss legislative issues. In fact, COC’s have gathered across the country, including Texas, for nearly three decades without incident.  COC’s are clearly a form of protected political activity. But from the onset, authorities in Waco insisted that the incident was the result of a gang meeting to discuss turf. This complete fabrication of reality has served as a launching pad for generalized discrimination and the mischaracterization of motorcycle rights groups like the Confederation of Clubs.

This framing of the event was also used to justify the obvious deprivation of Due Process involved in arresting more than 170 individuals, without a shred of specified individualized suspicion or probable cause, and approving $1 million dollar bonds based on the prosecutor’s belief that punitive bail is justified if those arrested failed to cooperate. The 5th Amendment right to remain silent appears to have not been considered.

The overzealous and overly-broad nature of the arrests is becoming increasingly obvious. Some bonds are being substantially reduced, although more than 100 are still incarcerated, and no formal charges have been filed or recommended by a grand jury.  At least one civil rights lawsuit has been filed against the arresting entity and many predict that there will be many more lawsuits before the dust settles.

The Due Process issues involved with the Waco arrests are indicative of overzealous and abusive police discrimination currently tainting the criminal justice system. The ACLU explains in a recent press release:

“While all the facts of this tragic incident are still unclear, we do know that if any of the more than 170 arrests were based solely on membership in a group, the Constitution demands more, including probable cause. Mere membership in a group should never be the basis of an arrest. And dragnet arrests raise the specter of overzealous police work, just like we’ve seen at our border and in cities around the country.

“Overzealous and abusive police work is but one facet of the multiple fissures in our criminal justice system. From the manner in which our communities are policed, to the way people are processed and prosecuted: It’s time to reform a criminal justice system that disparately targets and ensnares certain groups and minorities. Based on news reports, many of these bikers remain jailed without charges, bonds set, or arraignments. We call on the Waco Police Department to release a detailed report on what triggered their response, the rationale for detaining such a large number of these bikers, and the reasons for keeping many of them locked up without charge.”

A simple search on Google will reveal that these destructive mischaracterizations are also seeping beyond the boundaries of Waco. Authorities from Tennessee to California are attempting to use the Waco tragedy to justify generalized presuppositions about motorcycle clubs and political gatherings like the COC. Law enforcement in some states have even directed citizens to call and report any sightings of motorcycle club members wearing their colors and warning citizens not to approach them because clubs are violent and dangerous. These generalizations are irresponsible, inaccurate, and reminiscent of how military dictatorships justify totalitarian police tactics to marginalize and then eliminate groups perceived as a threat.

Motorcycle clubs, even self-identified 1% clubs, are comprised of individuals from a cross-section of society.  It is definitely fair to say a rebellious mentality permeates the mindset of many in the motorcycle club community.  But broad generalizations of criminality are specious at best. Membership includes doctors, lawyers, legislators, veterans, ministers, mechanics, construction workers, truck drivers, and small business owners.

Allowing the continued marginalization of motorcycle clubs based on sensationalized generalizations risks setting an extremely dangerous precedent that will ultimately erode the concepts inherent to the survival of a truly free and democratic society. Individuals should be judged by their behavior, not their appearance. Protecting the right of individuals that are members of politically and socially marginalized classes to freely associate, and express that association, serves as the bright-line and foundation that the 1st Amendment relies on to insure these protections are guaranteed for everyone.

Imagine members of the Catholic Church, or other churches for that matter, being rounded up or treated as suspicious due to the publicized crimes of priests or preachers in their faith. Or imagine law enforcement issuing a warning to all people driving a car to not drive in their town because there was a tragic incident at a car show and they couldn’t tell the difference between car gang members and automobile drivers. Or imagine law enforcement stopping, questioning, and frisking any teenager wearing a trench coat based on the argument that there is reasonable suspicion after Columbine.

The reason it is hard to imagine these things happening in America, where it is not acceptable or constitutionally permissible to base suspicion on an individual’s appearance or mere associations, as opposed to their behavior, is because the Bill of Rights is founded on the idea that expression and association are critical components and actual linchpins of a free society. Totalitarian governments justify sacrificing the civil liberties of innocent people based on an ‘ends justifies the means’ mentality.  This unconstitutional mentality is simply unacceptable in an advanced democratic society and must be rejected by even those that have no connection to the motorcycle club world other than the idea that freedom depends on the individual right to associate and express that association.

16 Responses to Why All Americans Should Be Concerned About Waco