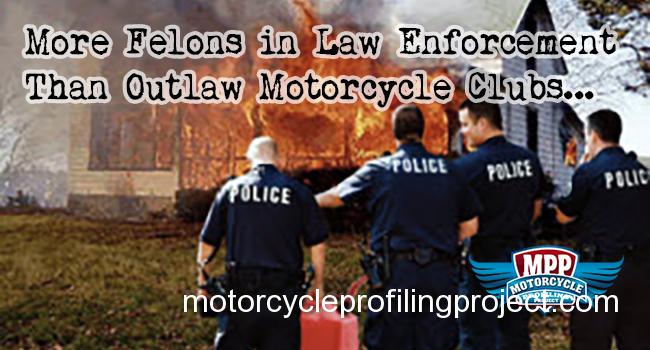 Authorities openly target motorcycle clubs, particularly 1% clubs, selectively enforcing the law, in order to harass or investigate individuals based on the belief that they are definitionally criminals. This perspective is based on an outdated stereotype that is ignorant of statistical reality and foundational constitutional principles that have been consistently confirmed by the Supreme Court and other federal courts.

Many federal and state authorities insist that what they call “outlaw motorcycle gangs/OMG’s” are a significant organized crime threat in America, despite the statistical data that proves criminal activity involving these clubs is negligible at best. (Note: the OMG tag is universally rejected by the clubs labeled gangs by law enforcement.)

Tens of millions of dollars are spent targeting and prosecuting motorcycle clubs based on a fallacy of composition. The regurgitated actions of the few are used to create a generalized assumption about thousands of people, regardless of statistical reality. Crimes committed by individual members of motorcycle clubs are highly sensationalized and presented to be representative of the entire community.  In fact, the statistical data that does exist, including the data generated by these same agencies, proves definitively that clubs labeled OMG’s represent a myopic percentage of criminal activity in this country.  Indeed, data suggests that law enforcement agencies commit and sanction many more major crimes than motorcycle clubs.

To begin to paint an accurate picture it is necessary to know how many members of these clubs and convicted felons there are in the US. Statistics say that there are 44,000 members of clubs labeled OMG’s, 24,000,000 convicted felons, and 6,851,000 whom are currently under correctional supervision.

Statistical Reality- Outlaw Motorcycle Clubs Members a very small fraction of convicted felons in the US.

Although there is no statistical data tracking the number of motorcycle club members who are convicted felons, law enforcement would have you believe that all members of clubs they have labeled OMG’s are criminals.

Despite the obvious inaccuracy of this claim,- most members of clubs labeled OMG’s have no criminal record- let us assume for the sake of argument, and to demonstrate the absurdity of law enforcement assumptions, that every member of every club that authorities label a criminal gang is a convicted felon.

Even if all 44,000 members of clubs labeled OMG’s were convicted felons, the overall impact on felony convictions would be minuscule. Do the math. 44,000 members/24,000,000 convicted felons=0.00183333 or .183333%.  The impact on those currently under correctional supervision would be similarly insignificant. 44,000 members/6,851,000 currently under supervision=0.00642242 or .64%. A fraction of 1% does not justify the stereotype of criminality. It’s that simple.  The following Pie Chart graphically demonstrates the absurdity of focusing on motorcycle clubs as a law enforcement priority. 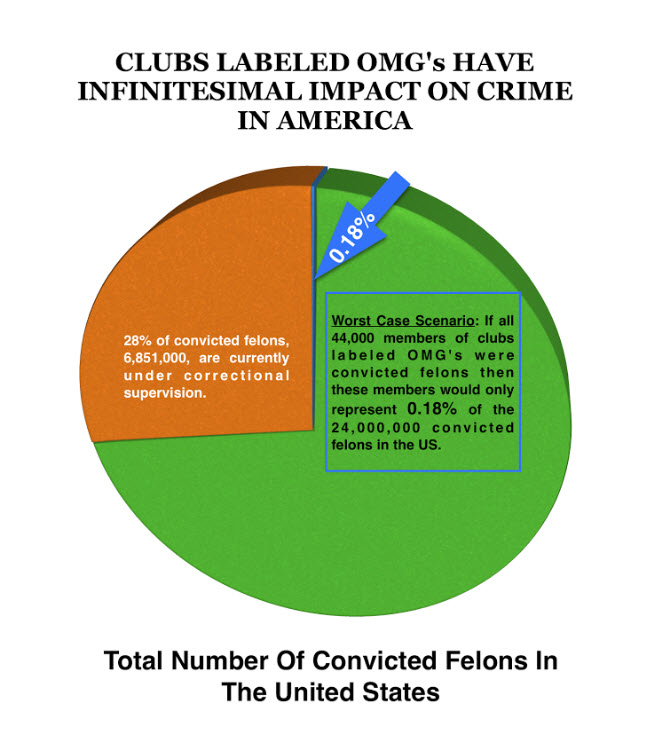 Although the NGIC estimates the number of members, no data on how many members are actually convicted felons is available.  On August 2, 2016 the MPP conducted a short survey with a small national sampling to generate data on the issue.  The survey data is derived solely from motorcycle clubs labeled OMG’s by law enforcement.   The survey asked two questions; 1- number of members in your Chapter; and 2- number of convicted felons in your Chapter.

Average number of Convicted Felons per Chapter: 3 or 20%

The survey results revealed that there was an average of 1 convicted felon in 5, or 20%.  Although the above example, which counts every member of targeted clubs as convicted felons, demonstrates that clubs definitionally have a minimal crime print, 20% of members is a far more realistic projection than 100%.  20% of 44,000 = 8,800 club members that are convicted felons.  8,800 represents an almost non-existent 0.036% of the 24,000,0000 total convicted felons in the US. 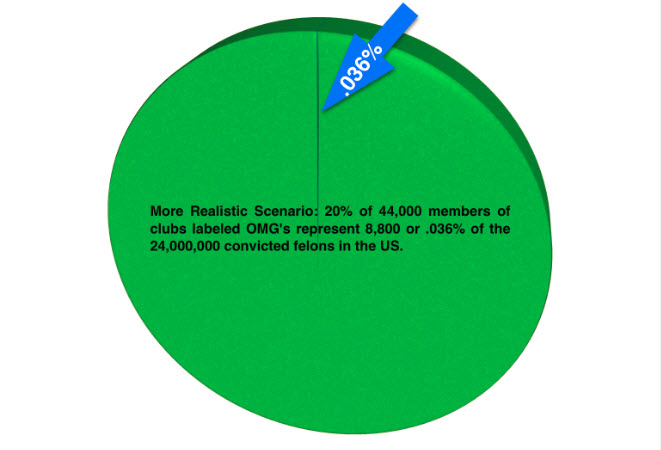 Why Are There Felons In Motorcycle Clubs?

Options in society for most felons are extremely limited in terms of employment and some basic civil liberties and often felons feel rejected and stigmatized by society. Motorcycle club culture was created by individuals that had been rejected by society after having returned home from war. Motorcycle clubs provide an opportunity for reintegration to those released from incarceration without the constraints of a judgmental mainstream.

The motorcycle club world is a classless society in terms of mainstream establishment social hierarchy.  It doesn’t matter whether you’re a common laborer or an executive.  When you walk into the club world, status is dictated by respect and honor and not your education or job title.  Club culture provides an alternative way of life free from the condemnations of the mainstream. Everyone has to live by the same legal schematic. But not everyone has to reinforce or acknowledge mainstream social hierarchies or elitist behavior.

Note: Some crimes are definitionally despicable and individuals that have committed these crimes are not accepted, or they are ostracized, from the club community. Crimes targeting children are an example of such an offense.

In 1997, according to the criminal defense firm O’Brien Hatfield, PA, “It came to light when reporters revealed the FBI had authorized mobster “Whitey” Bulger to continue his criminal enterprise long after he became an FBI informant in 1975. Since that revelation, the U.S. Attorney General has required the FBI to keep reports on “otherwise illegal activity” by its “confidential human sources.”

But obtaining these reports has proven difficult over the years. At least until members of the press were able to obtain some quantifiable numbers from the FBI. The Huffington Post Reported on December 27,2013:

“In a Jan. 14, 2013, letter to Justice Department officials, obtained by The Huffington Post through a Freedom of Information Act request, FBI officials disclosed that its 56 field offices authorized informants to break the law at least 5,939 times during the 2012 calendar year. USA Today reported earlier this year that the bureau allowed its informants to break the law 5,658 times in 2011.”

O’Brien Hatfield explains that the reports “indicate the otherwise illegal activities were considered Tier I and Tier II violations. The Justice Department defines a Tier I violation as activity that would be criminal if not for the authorization of a federal prosecutor, and includes major crimes such as drug trafficking, public corruption and crimes of violence. Tier II violations aren’t necessarily less serious but can authorized by a senior FBI field manager.”

“Unfortunately, other law enforcement agencies are not required to keep such reports, although it is widely assumed that all levels of law enforcement allow informants to commit crimes during investigations”, says O’Brien Hatfield.

Annually, nearly 6,000 major crimes are being authorized by the FBI alone. Considering that all levels of law enforcement authorize criminal acts, the actual numbers would be truly staggering.

All levels of law enforcement sanction informants to commit major crimes in order to arrest and convict other individuals for committing these same crimes. This hypocrisy overwhelms the amount of criminal activity in the club community many times over.

Police officers are arrested about 1,100 times a year, or roughly three officers charged every day, according to a new national study, thought to be the first-ever nationwide look at police crime, conducted by researchers at Bowling Green State University through a grant from the Justice Department’s National Institute of Justice.

The most common crimes were simple assault, aggravated assault, and significant numbers of sex crimes. About 72 percent of officers (825 annually) charged in cases with known outcomes are convicted, more than 40 percent of the crimes are committed on duty.

This is hypocrisy at the highest level. Statistically, without bias, police are more of a threat to public safety than outlaw motorcycle clubs have ever been.

Conclusions: Motorcycle Clubs Are Not A National Law Enforcement Issue.

Considered in context with data suggesting law enforcement is a larger contributor to crime, the analysis leaves no doubt that clubs targeted by law enforcement are targeted based on stereotype as opposed to statistical reality.  The vastly expensive surveillance, investigations, harassment and profiling campaigns conducted by authorities are simply not justified based on the irrefutable statistical reality that motorcycle clubs mathematically have a negligible to non-existent impact on the level and magnitude of felony crime in the United States.