The National Motorcycle Profiling Survey that began October 1st is beginning to show some strong early trends confirming that motorcycle profiling is a prevalent and widespread problem. The survey is intended to provide a clearer picture of motorcycle profiling from a national perspective through a thorough and comprehensive series of specific and detailed questions. Although there have only been approximately 1,400 surveyed in the first couple of days, some trends are so strong that they are worth talking about now.

84.52% of motorcyclists report riding a motorcycle places them under a higher level of scrutiny from law enforcement and business owners. Motorcyclists feel that they are separated from their fellow Americans. Importantly, this is not just a club issue. 41.48% of those surveyed were independent riders being stopped due to their VFW, Legion Rider, and ABATE patches. 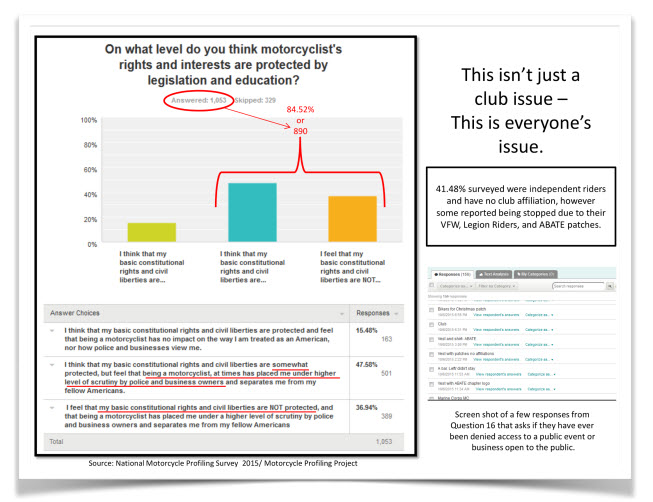 53.79% of those surveyed have witnessed police presence or investigations at planned and publicized motorcycle gatherings. This is particularly disconcerting considering these scenarios involve law enforcement stereotyping of the entire community, not a specific club for specific reasons. In nearly 45% of these cases police were actively gathering intelligence and taking photos of everyone coming and going. These events are social, charitable, and political in nature. This type of harassment represents beeline discrimination based on stereotyping and is constitutionally impermissible. 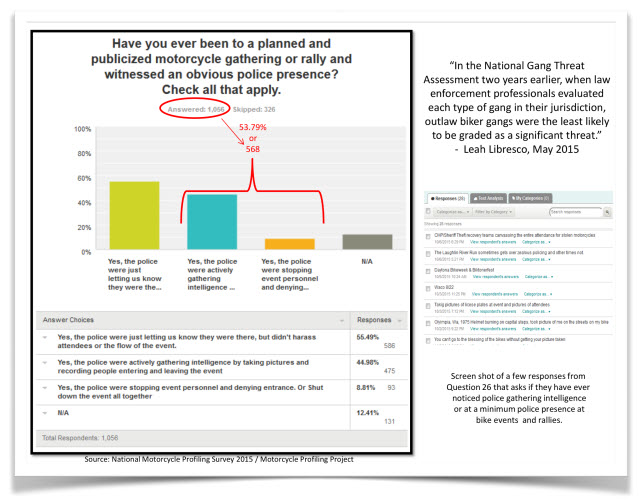 80% of those surveyed believe that there is a police cover-up or intentional deception relating to the facts surrounding the Waco incident. This clearly demonstrates the level of distrust between the motorcycle community and law enforcement. Profiling directly isolates an entire class of Americans from the mainstream cutting them off from their fellow Americans.

85% surveyed also believe that the civil liberties of the 177 arrested are compromised. Only 1.5% believe the mass arrests are justified. Clearly, the lack of specific probable cause and oppressive bail results in the majority of people understanding that the Waco PD was clearly not justified. 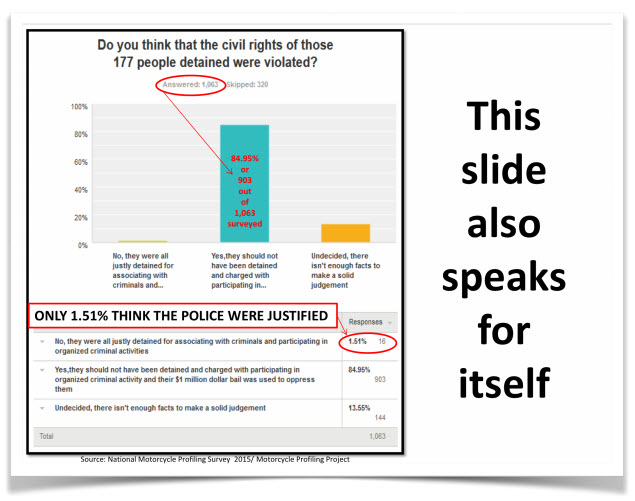 The National Motorcycle Profiling Survey, created by the North Florida COC and sponsored by
the MPP, provides valuable insight into the issue of motorcycle profiling in America. As we move
towards an effort to pass a national motorcycle profiling law participation in the survey will
provide a valuable piece of evidence in the overall pattern justifying relief.
If you haven’t taken the survey yet, it can be found here. And please encourage as many as you
can to participate in this most important effort. There is no democracy without participation.