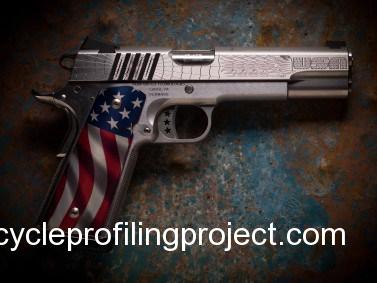 Bikers and guns. Really, they go together like peanut butter and jelly.

Most bikers and motorcycle club members are rugged individualists that believe in the 2nd Amendment right to bear arms and the concept of self-defense. Not crazy revolutionaries. But die hard Americans, many of them veterans, that believe in the core principles of the Bill of Rights.  It’s true that many bikers are rebellious and critical of government control. Many bikers are also politically active. Most bikers are not felons.  And most bikers that carry handguns possess legally issued concealed carry permits.

Despite this reality, many bikers with guns are targeted by the same people that granted them the legal right to carry a gun in the first place. Why?  Because law enforcement has, even facing the fact that motorcycle clubs (including 1% clubs) are constitutionally protected associations, historically vilified bikers as criminals based on a discriminatory stereotype. This mindset is based on fear, misinformation, and the historical pattern of suppressing any community vocally critical of law enforcement.

Anyone concerned with government overriding legal mechanisms allowing gun ownership and concealed carry should be highly concerned about law enforcement’s obvious attempts to disarm members of motorcycle clubs based on nothing more than association.

WHERE DO BIKERS GET THEIR GUNS?

So where do bikers and club members obtain their concealed carry permits?  Well, from law enforcement agencies of course.  The same people that mis-characterize motorcycle clubs as gangs are the same people that know those carrying guns are legally carrying them. More than that, they know that those with concealed carry permits have also passed extensive state and federal background checks and they are not violent felons.  In fact, in states with concealed carry laws, almost without exception, every club member with a gun will be legally carrying that gun.

Importantly, even for those that support more extensive regulations and required background checks, concealed pistol permit holders have undergone extensive scrutiny, given their fingerprints voluntarily to authorities, and in many cases have attended firearm safety courses.

So why don’t they just deny permits to bikers if they’re so bad? Well, that would be baseline discrimination based on association and appearance, not behavior. They know these bikers are not gangsters. Motorcycle clubs are legal associations and bikers cannot be arbitrarily excluded from the 2nd Amendment because law enforcement is prejudicial.

The reason law enforcement is prejudicial relates to the long history of bikers fighting law enforcement abuses in the legislature, the courthouse, and the street. Those that fight for social and political justice are most often vilified by law enforcement. This makes sense because law enforcement holds up the current order. Grassroots movements argue for fundamental change in the status quo. There is an unavoidable philosophical conflict when our goals as a movement relate to constraining abuses of law enforcement discretion.

The right to bear arms saved my brothers from a corrupt Portland drug task force in 1979. A task force that illegally raided the clubhouse unannounced to plant drugs and kill people. But the right to bear arms provided legitimate self-defense against tyranny and justice prevailed. But only after one dirty officer was shot in self-defense, a brother spent two years in prison until another dirty cop came forward confirming the task force lied to get a warrant and planted drugs. Without adequate self-defense a houseful of my brothers would have been terminated and the crime would have been covered up with planted evidence. (See the book Black Thursday by David “Double D” Devereaux)

Even though my brothers were exonerated and the obvious corruption was uncovered, to this day law enforcement characterizes my club as the one that killed a cop. Conveniently, the murderous corruption of police is not explained. Our dedication to advancing the rights base of motorcyclists is not mentioned. The truth is ignored even when legislators unanimously approve laws addressing the issue of profiling and making the act explicitly illegal. Fortunately, legislators can control law enforcement policy and budgets.

Law enforcement knows the truth about motorcycle clubs but they also understand the power of propaganda.  Reality is just not publicly convenient. But they still issue concealed carry permits to every motorcycle club member that applies because club members are not felons and do not have a history of violent criminality.

In fact, more officers are charged with felonies than bikers, including members of self-identified 1% clubs. For example,

“Houston lawyer Kent Schaffer, who has represented Bandidos for more than 30 years, said there are more police officers indicted on felonies every year in the Houston area than Bandidos.”  (see After Waco, questions remain about police, By Dane Schiller, Houston Chronicle, June 6, 2015)

How many individuals arrested with handguns in Waco were legally permitted to carry concealed handguns?  How many of the other weapons recovered were legally obtained?  How many were arrested because they were legally carrying or in possession of a weapon?

There has not been a single report of an illegal weapon. The fact is, the only reports have been related to confiscating legal and legally concealed weapons, even by those that were not arrested. (For example, see In Country Vets, False Accusations, Unethical “Journalism” And The Aging Rebel AUGUST 11, 2015 )

How many pulled their weapons?  Of those that pulled weapons, how many were acting in self-defense?  And why would carrying a legally concealed weapon be probable cause for an arrest?

The implications of propaganda overriding reality should be obvious to anyone paying attention. Marginalize, vilify, isolate, discriminate, and eliminate.  And one of the best ways to achieve the goal is disarming the entire class.

“Schwartz said membership in a criminal street gang prohibits one from having a legal concealed handgun license.”

There are other cases of individuals with concealed carry permits having their weapons seized and being charged with a misdemeanor for being a gang member. No crime is committed or even implied.  Law enforcement is defining membership in a group they label a gang, a group that has validated 1st Amendment protection, with no judicial check on due process for that determination, as a crime.  Kent Schaffer, the attorney from Houston, “pointed to his representation of one Bandido recently charged here with a misdemeanor for being a member of a gang with a gun. Schaffer is challenging the definition of a gang, noting the man had never before been arrested.” (see After Waco, questions remain about police, By Dane Schiller, Houston Chronicle, June 6, 2015)

Sounds an awful lot like entrapment to me. Law enforcement issues the man a permit after extensive background checks and then arrests him for carrying a weapon they permitted him to carry?  Makes absolutely zero sense. Which makes it easy to understand why it should be considered unconstitutional.

Gang labeling is not enough to establish probable cause that a crime is occurring, a necessary condition to seizing a legal weapon. Simply carrying a legal gun as a member of a motorcycle club, including a 1% club, is not a crime. The courts have concluded that motorcycle club associations and colors, including 1% clubs, are protected by the 1st Amendment. It is not illegal to be in a club, otherwise they could arrest an individual for wearing colors. By this logic, you could be denied your right to vote. (see How Waco Is Being Used To Decimate The 1st Amendment JUNE 26, 2015

The motorcycle rights movement has been a black eye to law enforcement for many years. Now that the movement is unifying coast-to-coast to fight law enforcement abuse, anti-biker propaganda will increase in intensity. Exposing obvious contradictions between propaganda and reality is one of the best opportunities to gain public support, and the issue of concealed carry permits touches a lot of American citizens.

Average American citizens understand that the 2nd Amendment is one of the most fundamental elements of a free society. History validates that disarming domestic populations too easily leads to totalitarian law enforcement and government abuse in addition to being more vulnerable to foreign threats.  The right to bear arms reduces the probability of these threats and reduces the probability of conflict through deterrence.

If law enforcement is successfully able to marginalize the motorcycle club community, one of the most socially and politically active groups in this country, to the point that fundamental rights are denied to even those associated that have no criminal records of any kind, then no community is safe.

Biker Lives Do Indeed Matter. Not just to bikers, but to everyone. In a very real way, the fate of motorcyclists will serve as a blue print for other groups in the future. Disarming bikers is a strategy to cripple the rights base of one of the most visible and active grassroots social and political movements in America. Much of the movement’s efforts are to combat civil liberty abuses by law enforcement targeting motorcyclists. If bikers are successfully marginalized as criminals not worthy of baseline liberties, then the strength of our political movement exposing law enforcement abuses will be crippled as well. It’s a blueprint for social control in the 21st Century.