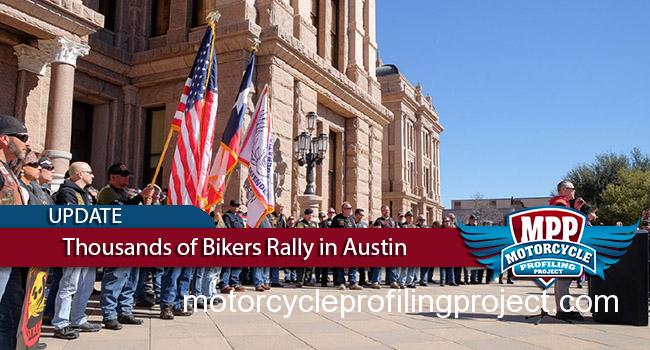 The motorcycle rights movement is alive and thriving in the state of Texas. Although many motorcyclists conjectured that the tragedy that occurred in Waco on May 17, 2017 would reduce participation in the Texas Confederation of Clubs and Independents, over a thousand club members and independents showed up for the bi-annual Rally held at the Capitol in Austin every other year. On January 23, 2017, the Motorcycle Profiling Project joined select motorcycle rights advocates from around the country and a contingent representing the National Council of Clubs (NCOC) in a show of support and solidarity that clearly communicates that clubs and independents from across America support the Texas COC&I and Texas bikers in their struggle against motorcycle profiling and discrimination.

After Waco, many in the biker community worried that the motorcycle rights movement in Texas would become fractured and lose participation. This logic was based on a couple of factors. There was supposed to be a Texas COC&I meeting at the Twin Peaks where the tragedy occurred. Would clubs and independents stop participating for fear that merely being present at a political meeting could get you arrested without individualized suspicion and given a 1-million-dollar bond? Would law enforcement start surrounding all TCOC&I political gatherings with a multi-agency task force with high powered rifles?

But Texas bikers have made another choice. The manpower behind the movement to protect motorcycle rights is still mobilized and politically active. TCOC&I meetings have continued to peacefully assemble statewide as they have for nearly 20 years without any incidents or violence.

In the face of crisis, Texas bikers have not laid down and surrendered to fear or complacency. Instead, they have chosen to stand up and fight for their liberties as demonstrated by the mass gathering at the Capitol on January 23rd. And this mobilization is nationwide as evidenced by the support from states coast-to-coast represented in Austin. 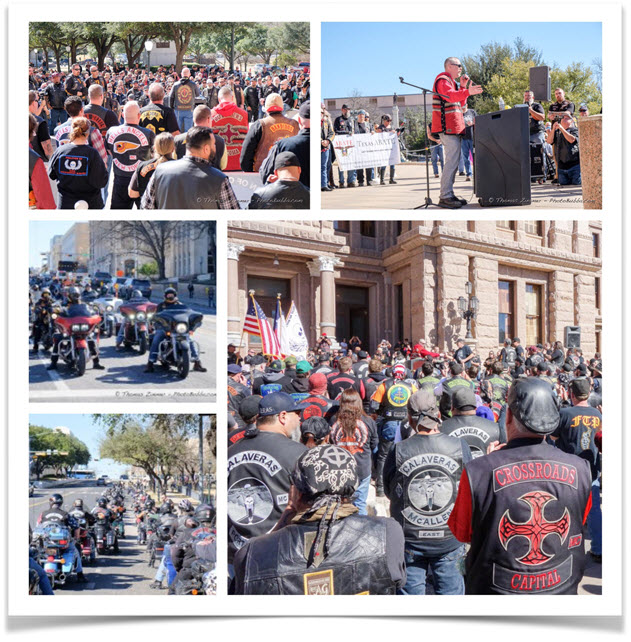 Bikers from Across America Show Support for Texas Bikers

After Waco, many motorcyclists view the state of Texas as ground zero in the effort to preserve motorcyclist’s civil liberties and the fight against profiling and discrimination. Although there was some discussion relating to pending motorcycle safety legislation like lane-filtering, the clear message from the community was that motorcycle profiling and discrimination is the most important issue currently facing Texas bikers.

In search of support and sponsorship, the mass of bikers gathered at the steps of the Capitol to deliver their message. Impressively, many of them were not from Texas. Indeed, the NCOC showed their support with a contingent from Washington State, California, New York, Maryland, Nevada North Carolina and Utah. Long Island ABATE was also present and displaying a banner declaring support for Texas bikers. The Motorcycle Riders Foundation, another organization dedicated to the fight against profiling, was also present.

Guest speakers included Dr. Will Dulaney from North Carolina and David “Double D” Devereaux from Washington State, as representatives of the NCOC and MPP. Double D spoke about Texas being at the epicenter in the battle against motorcycle profiling. “Texas showed us all that grassroots manpower worked when they brought the country the US Defenders program. Now it’s time to use the model to protect Texas bikers!”

Dulaney introduced a new program from the MPP providing consultation and expert witnesses to bikers with public defenders facing criminal charges. “Public defenders are often overwhelmed with caseloads and uninformed about issues specific to the biker and club community”, explained Dulaney.

Russell Radke, representing the MRF, discussed the national organization’s commitment to pass federal legislation addressing motorcycle profiling. Radke explained that the MRF is one of the only organizations with an infrastructure firmly rooted in Washington DC.