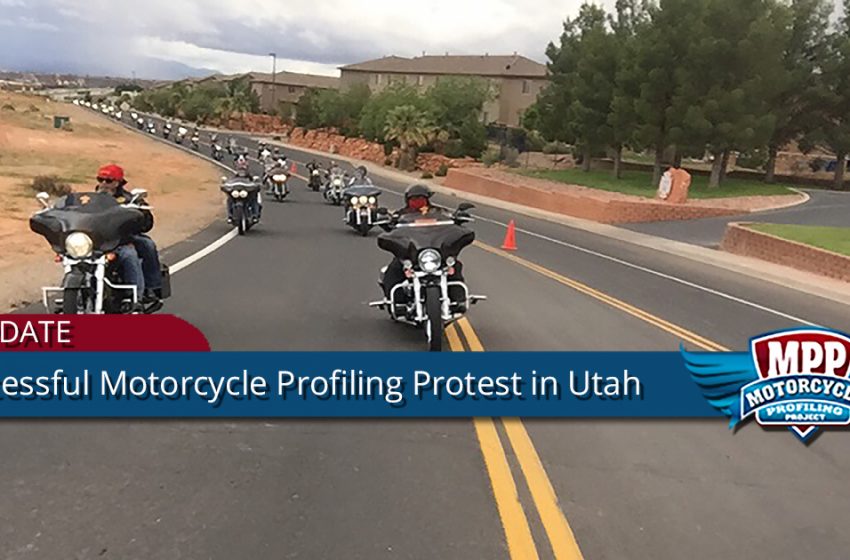 An organized and mobilized response by motorcyclists in Nevada and Utah protesting the policy of motorcycle profiling embraced by law enforcement in St George, Utah appears to be having success.  Recent grassroots motorcycle efforts culminated in a protest run to St. George on May 7, 2016 in which there were zero examples of profiling or harassment and a tangible effort by the St. George PD to change their behavior and treatment of motorcycle club members riding in their town.

On April 23, 2016, the Motorcycle Profiling Project released a response to recent public statements by the St. George PD made to Hailey Higgins of ABC4 Utah in which they were embracing a paradigm and policy of profiling. The statement, in part reads:

“Sgt. Williams of the SGPD made statements…admitting to targeting individuals because they are members of motorcycle clubs in order to discourage them from riding their motorcycles in St. George.”

“The arrogance of these statements proves a fundamental lack of understanding related to basic constitutional principles related to the 1st Amendment and the 4th Amendment. Utah motorcyclists should unify in an effort to pass legislation addressing the issue of motorcycle profiling and reduce the mentality currently exercised by the St. George PD.”

The MPP response was widely accessed through search engines and social media. Local news media and news outlets were also sent the story. The blatantly discriminatory statements made by a Sgt. were widely exposed.

In fact, many motorcyclists were outraged by Sgt. Williams statements and commented extensively on social media with opinions of their own.

On April 28th the MPP released a video of a highly inflammatory profiling stop involving the Utah Highway Patrol and the SGPD on Facebook. This video was obtained as a result of a public information request made by activists that have learned the skills to obtain proof that profiling is occurring. This video was widely viewed and again sent to the SGPD.

Motorcycle rights activists in Las Vegas capitalized on the momentum and organized a run to protest St. George’s policies of discrimination on May 7th. Although the weather was bad, approximately 100 motorcycles made the trip from as far away as Las Vegas to join the protest.

The motorcycle club member that organized the protest has reported to the MPP that there was not a single incident of profiling in or around St. George during the protest. In fact, SGPD Sgt. Hepler reached out to event organizers before the event to ensure them that there would be no profiling issues and even suggested less congested routes due to another unrelated event happening that same day in St. George.

According to the event organizer:

“It was the most respectful polite conversation I’ve ever had. Sgt. Hepler called to let us know they were having an International Ironman Competition and to give me best directions so there would be no conflict. He said to call him if any cops gave us any trouble and said he wanted to come by and shake my hand if possible.”

Importantly, the MPP video released on April 28th reveals officers on the scene confirming that Sgt. Hepler was the source of the policy of mandatory profiling of motorcycle club members that led to the discriminatory stop in the first place. This same Sgt. acted in a completely different manner when a grassroots movement exposed an irrefutable policy of profiling.

The protest ride organizer says, “Sgt. Hepler was at the shop where the protest ride began when I arrived. He later texted that it looked like a good turnout and said to have a fun and safe ride.”  And Sgt. Hepler lived up to his word. As stated, there were zero profiling incidents that day in St. George.

These results are a testament to an organized and active grassroots movement. From political media to the feet on the ground, motorcyclists are responsibly protesting discrimination and achieving near instantaneous results in St. George. Time will tell if this change in behavior will be long-term. What does appear to be long-term is the resolve of the motorcycle club community to fight for their civil liberties.