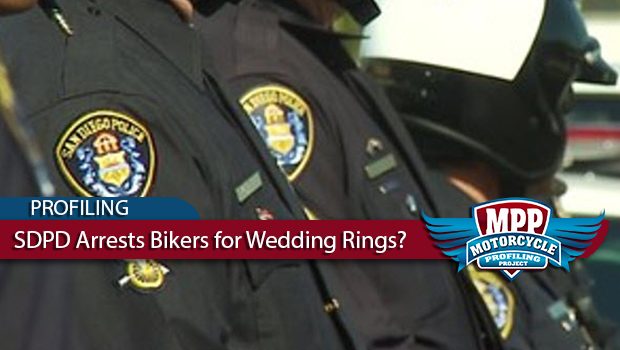 This type of behavior by police deprives citizen’s basic civil liberties and risks exposure to civil liability claims against government agencies and their employees. Legislation prohibiting the practice of motorcycle profiling and providing victims an avenue of relief is the best opportunity to alleviate civil rights violations and the liability that follows.

The MPP received a letter from one of the victims describing the incident in detail.

Two members of the Chosen Few MC were patronizing the Off Base bar on Miramar Road in San Diego. These men noticed that SDPD units had been posted up outside and we’re obviously observing them for several hours as they socialized in the bar. When these two men decided to leave they were not concerned with being pulled over because neither of them had drank any alcohol and neither of them even had a criminal record.

But being 1%’ers is enough for the SDPD. Less than a block after exiting Off Base, “the police unit that had been watching us for several hours (yes we could see him) turned his lights on” writes one of the men. “Officer Wolff from the “SDPD Crime suppression” unit told me he stopped me because of “my loud pipes and my whip”. There was no decibel meter in sight, my pipes are stock, and my whip is a decorative one that is approx. 24 inches and zip tied to my front brake so therefore not accessible.”

The police seized rings, cell phones, club colors, and even impounded a motorcycle as evidence when they couldn’t open the saddle bags.

The SDPD attempted to take pictures of the men’s tattoos and the men refused. “It was at this point I realized they were completely out of order and refused. They then left me in the squad car handcuffed in their parking lot for more than an hour. Officers Rojas, Wolf and SGT James Johnson were involved in my arrest, and there is an addition two officers involved in my friend’s” says one of the men.

Obvious Case Of Profiling and Discrimination

This is a text book example of both motorcycle and racial profiling.

Loud pipes and decorations were used as clear pretexts for harassing and arresting two Chosen Few MC members that they had been observing for hours. Neither of these men had criminal records. They were targeted because they were members of a 1% motorcycle club, not their behavior. To consider a decoration a slingshot and wedding rings brass knuckles is absurd. To add a gang enhancement based on membership in a constitutionally protected association is deplorable.

“They are causing financial distress to people with zero criminal background, all for being members of a motorcycle club which by law is legal and not recognized as a criminal gang” writes one member.

And this incident may go beyond motorcycle profiling. According to one member, an educated professor, “This crime suppression unit has been racially and community profiling members of my club. We are a racially mixed club and yet they only arrest the black members. They are out of control are not serving the public with these tactics.”

SDPD Has History of Documented Abuse

Profiling and discrimination is nothing new in San Diego. The SDPD has a documented history of abusive law enforcement practices and misconduct. A recent US Department of Justice audit concluded:

“Federal investigators looking into recent officer misconduct within the San Diego Police Department found officers were not held accountable and once they broke the rules, the misconduct continued undetected for years.”

As a recent guest of the San Diego Confederation of Clubs, I have heard firsthand accounts of profiling and discrimination of motorcyclists in the San Diego area proving that this incident with the Chosen Few is not isolated. This type of misconduct must stop and legislators and judges must ensure accountability so the SDPD’s abusive profiling practices don’t continue un-checked.

All charges should be dropped against these two men and all officers involved should be reprimanded. The SDPD should immediately educate it’s officers in order to halt this epidemic in San Diego. Expressing freedom of association is protected by the 1st Amendment and selective enforcement of the law is prohibited by the 14th Amendment.

The reality is motorcycle profiling is an epidemic in many parts of California. The veil needs to be lifted and exposed. Most incidents remain unreported which only compounds accountability and misconduct issues. Exposing the pattern of evidence also means legislative change is more likely. Legislation prohibiting motorcycle profiling and providing relief for victims is an effective and cost efficient solution that would help preserve civil liberties while also reducing government exposure to monetary liability.