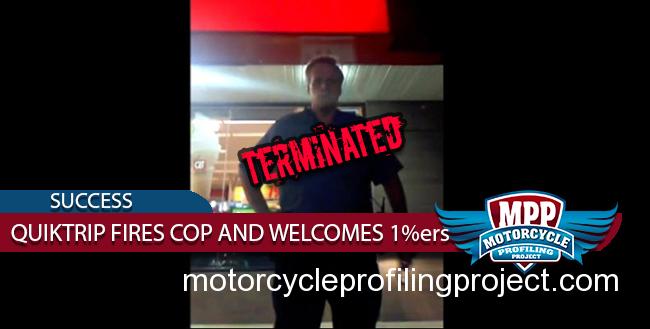 A recent incident involving an off duty police officer captured on video threatening members of 1% clubs with false arrest for trespassing, while working as a security guard at a QuikTrip gas station in Kansas City, mobilized the National Council of Clubs (NCOC) membership in Missouri and Kansas resulting in a significant victory for clubs in the region. Following a press release and official inquiries to the corporation and the KCPD, QuikTrip has renounced the actions of this off duty officer, released him from employment as a security guard, and clarified its policy of inclusion to all security guard personnel. This success in Kansas City is a recent example of how effective a mobilized grassroots movement like the National Council of Clubs can be and how to develop a pattern of evidence necessary for legislative relief.

A member of the Sons of Silence Motorcycle Club was cognizant enough to videotape the prejudicial actions of off duty officer Marchant the night of June 25th. This member immediately forwarded the video to the NCOC for review and action. The NCOC coordinated with its membership in Kansas and Missouri and quickly formulated a plan of action.

First, a statement describing the incident and released along with the video was published on motorcycleprofilingproject.com and forwarded to local media outlets, the QuikTrip corporation, and the KCPD.  Second, the Region II NCOC spokesperson then drafted a letter of inquiry to QuikTrip corporate and formally requested QuikTrip’s official policy regarding customers that are members of 1% motorcycle clubs and a request to clarify that policy to security personnel.

I’m writing today to report multiple occurrences of a disturbing nature happening at your location at I-435 and Front Street in Kansas City, Missouri.

On at least two recent occasions, individuals who happen to be members of 1%er motorcycle clubs have visited this location to purchase fuel and other sundries from your convenience store. These individuals have visited this particular store on a regular basis for this purpose in the past. In fact, one of them reports that he stops by this store every night on his way to work to purchase a cold soda pop to take to work with him.

On the two occasions that have been reported to me, an off-duty Kansas City, Missouri Police Department officer, named Officer [Marchant] (Badge Number 1706), who was apparently working as a security guard approached these individuals as soon as they arrived and ordered them off the property, saying that 1%ers weren’t allowed to patronize the store. The officer gave no reason for ordering them from the property except to say that they were on private property and, as long as KCMOPD officers were present, were trespassing.

I am not aware that QuikTrip Corporation has announced a policy of refusing the business of 1%er motorcycle club members. Certainly, there was no indication that 1%ers weren’t welcome at your Front Street location on the occasions I mentioned above; there were no signs that stated as such or even that motorcycle club colors weren’t allowed. When questioned, the clerks who were on duty at the store stated they had no problem with these individuals’ presence on the property. The only indication of any problem was Officer [Marchant’s] insistence that they were trespassing.

Over the past several years, various federal district and appellate courts have ruled that by identifying with particular groups and wearing clothing that identifies the wearer as a member, citizens are exercising rights of free speech and assembly guaranteed by the US Constitution. By employing individuals in security positions who profile motorcycle club members and single them out for special treatment, QuikTrip Corporation is complicit in violations of their Constitutional rights.

Please help me out here: Does QuikTrip have a policy that members of 1%er motorcycle clubs aren’t allowed to patronize QT locations? If that is the case, I’ll be sure to publicize this policy so as to insure motorcycle club members know they aren’t welcome on QT property. This includes a significant number of big truck drivers within our community—not just within the Kansas City area but across the Midwest and Southern states—who regularly purchase fuel at QT locations. Several who I have personally spoken with stated that, if this is the policy of your company, they will be sure to avoid any QT location going forward.

We only seek to be allowed to exercise our Constitutionally guaranteed rights as any other American can. Of course, we respect the right of QuikTrip to put in place whatever policies are legal and the company believes are appropriate on its private property. I respectfully ask that, if a prohibition on motorcycle club members is in fact in effect at your locations, you clarify this policy so we may be sure to comply. On the other hand, if Officer [Marchant] is mistaken and is acting outside of QT policy and procedures, I’d ask that you review security policies and make appropriate adjustments.

Finally, a member of the Mongols Motorcycle Club who owns a trucking company informally reached out to another QuikTrip location in Missouri that his company regularly does business with. A member of the Mongols MC was also threatened with false arrest for trespassing by officer Marchant on June 12th.  The amount of fuel sold to motorcyclists involved in the trucking industry in the Kansas City area is significant. This member’s informal inquiries were intended to determine whether this incident was isolated to one location or prevalent at other QuikTrips.

The results of the NCOC’s coordinated efforts generated near immediate results.

A Win For Motorcyclists, Club Members and 1%’ers.

Initially, the manager of the other location writes to the Mongols MC member that informally inquired:

“Wanted you to know that this officer is no longer working security for any QT stores – so sorry for the mistreatment of your friends and family – we highly value your business and respect.”

Although not an official policy statement, this was the first result of mobilized action. On July 8th, the first official communication from QuikTrip corporate was received and strongly echoed the informal response. 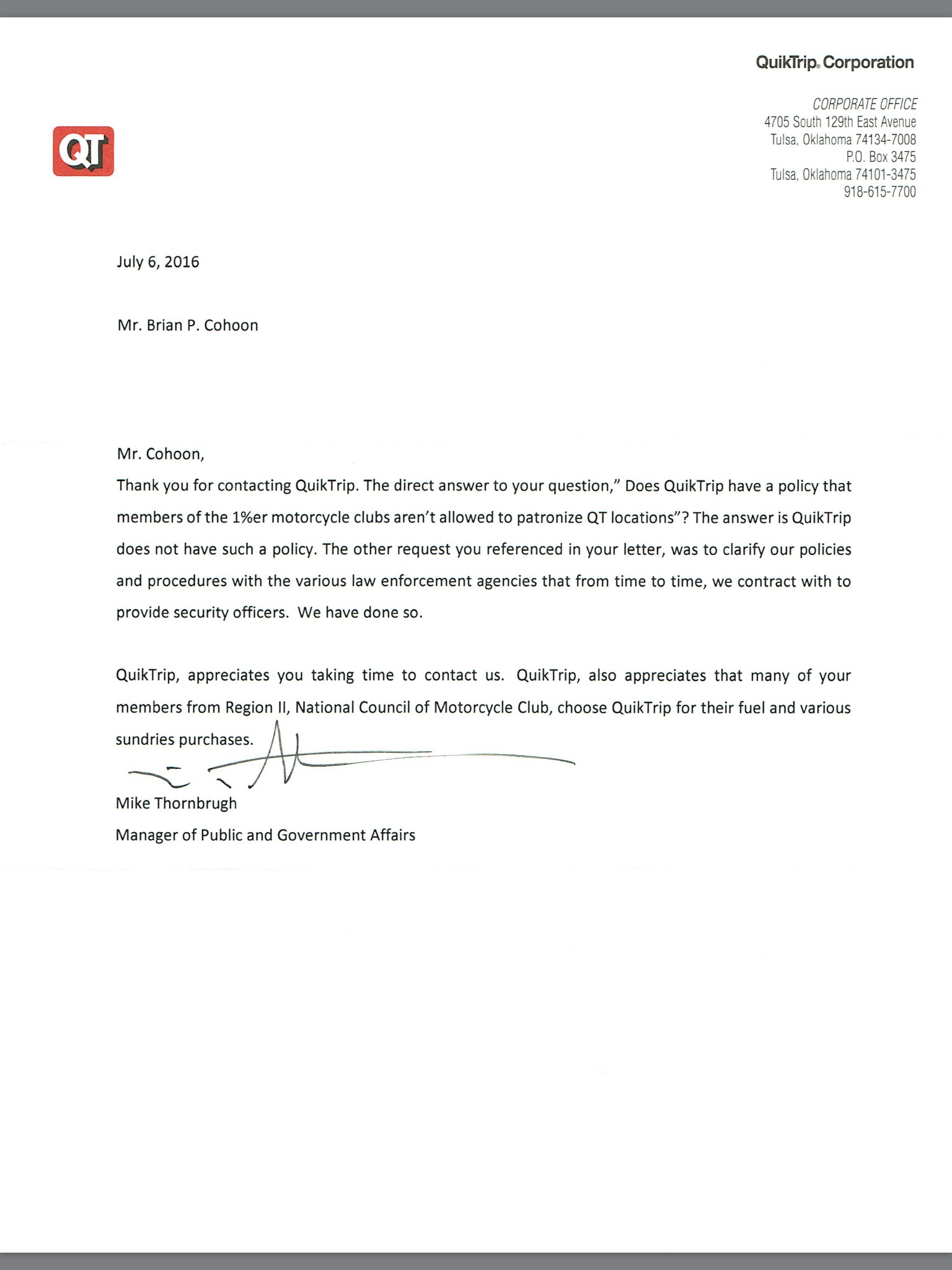 Although law enforcement falsely describes a 1%’er as an individual proudly displaying criminality, the individual that took the video of officer Marchant’s threats truly demonstrates what a 1%’er is really all about.

A 1%’er stands his ground. A 1%’er is not afraid of being arrested based on idiotic and unconstitutional threats.  A 1%’er is absolutely committed to the idea that we should all be free from abusive authority and social control. A 1%’er epitomizes a freedom fighter and the struggle against an emerging police state that operates by imposing fear and intimidation on innocent people. A 1%’er stands up for the basic liberties embodied in the 1st Amendment and the right to express this commitment to his brotherhood even when confronted by an authority figure attempting to illegally and unjustly discriminate. A 1%’er will be the first one to say “fuck off” when it needs to be said. A 1%’er commits to a life of loyalty, honor, respect for oneself and ones brotherhood and will not back down from that commitment.

Most people are too mentally weak and ethically compromised to be a true 1%’er.  Most people would not risk their freedom or their lives to stand up for themselves or their community in the face of abusive police action.  This 1%’er has integrity, intelligence, and foresight. And this 1%’er acted like a real man with confidence. as opposed to the intellectually and morally bankrupt officer Marchant.

These results should be considered a significant victory. Although the KCPD has not officially responded, officer Marchant being relieved of his position as a security guard at all QuikTrip locations is a win for motorcyclists and motorcycle clubs in the Midwest region. Moreover, an official statement from QuikTrip welcoming all motorcyclists, including 1%’ers, cuts against an inaccurate and vilified stereotype that motivated officer Marchant’s discriminatory mindset in the first place.  As the pattern of evidence continues to build, the necessity for legislation addressing motorcycle profiling at the state and federal level becomes self evident.