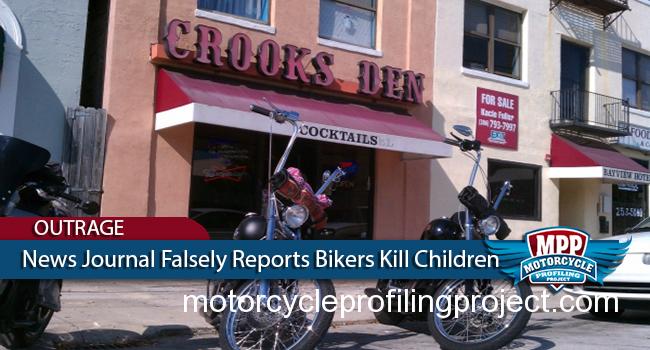 The Daytona Beach News Journal (News Journal) is disrespectfully using the anniversary of a biker’s murder as an opportunity to promote a discriminatory and highly inaccurate stereotype about motorcycle clubs, even going so far as quoting an investigator from Wisconsin saying that motorcycle club members have a history of killing children.

The National Council of Clubs, a movement representing the political, legal, and legislative interests of motorcycle clubs nationwide, is outraged that any media source would desecrate the memory of a man that lost his life prematurely by irresponsibly propagating fear and false narratives about tens of thousands of individuals that belong to motorcycle clubs.

The Story as Published in the Daytona Beach News Journal

The News Journal released an article on April 2, 2018 titled, “1 year later, murder of Daytona Outlaws biker ‘Louie da Lip’ remains unsolved.”  But instead of merely reporting on the facts of Louie’s murder, the News Journal used the 1 year anniversary of this incident to spread fear and sensationalized falsehoods regarding motorcycle club culture.  The News Journal reports:

“Members of biker gangs have committed murder, rape and other violent crimes and they have a history of degrading women and even killing children, said Charles Berard, a criminal investigator from Wisconsin who has studied biker gangs for more than three decades.”

The above quote is so highly inaccurate and offensive that it’s printing alone should disqualify Mr. Berard and the News Journal’s credibility. To imply that motorcycle clubs have a history of killing children is as far from the truth as possible. There is a fundamental and foundational principle among members of motorcycle club culture that crimes against children are absolutely not tolerated.

Basic research by the News Journal would have revealed that even qualified law enforcement experts recently testifying in trials in Waco and San Antonio recognize that motorcycle clubs will not allow members that have committed crimes against children and that committing a crime against a child is grounds for expulsion from the club. Indeed, there are dozens of motorcycle clubs such as Bikers Against Child Abuse (BACA) that are dedicated to the mission of protecting children.

On the other hand, law enforcement officers do truly have a long and irrefutable history relating to crimes against children and women. The Associated Press recently reported 1,000 cases of sex crimes committed by police, including sex crimes against children. The State of Florida is not exempt. Consider the recent conviction of a Florida cop for statutory rape while on duty.  And in terms of law enforcement killing children, there is simply not enough time or space to discuss even the most recent incidents that have happened coast to coast, including Florida.

What do the available statistics reveal? The 2017 National Motorcycle Profiling Survey, with only a 1.4% margin of error, demonstrates that less than 2% of club members in Florida have been convicted of a felony crime.

The News Journal should be admonished for irresponsible and one-sided tabloid reporting. Louie Da’ Lip’s memory should be respected with dignity. His murder should not be, must not be, used for the purpose of spreading fear and sensationalism. This fear is, in-turn, being used to justify the current epidemic of profiling and discrimination targeting motorcycle clubs, particularly in Daytona Beach.

Professional ethics would dictate that the News Journal cease taking an active role in law enforcement’s campaign of discrimination and begin to responsibly report balanced and researched journalism relating to motorcycle clubs.