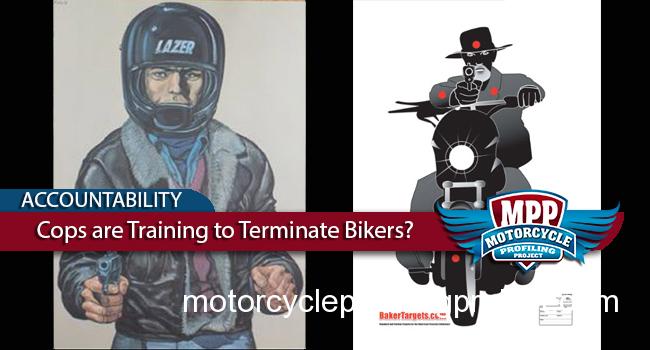 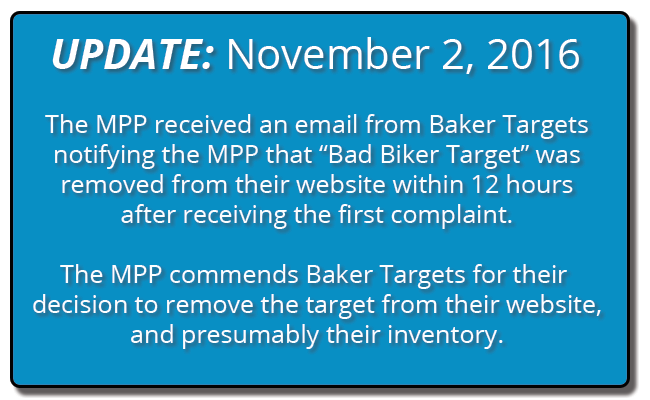 Many people interested in target shooting are familiar with practice targets. Many times these targets are silhouettes of human beings. Nothing descriptive, just a neutral target. Then there are practice targets that more graphically depict people. Beyond neutral practice targets, these targets depict stereotypical images of terrorists, bank robbers, and armed criminals with a hostage. It’s impossible to defend the actions or goals of any of these types of people so vilifying their images receives little objection.

But what about law enforcement practice targets that depict motorcyclists as a caricature of criminality? If motorcyclists wearing helmets and leather jackets are depicted pointing a gun as if they are a threat during training, doesn’t it make sense that this would eventually create the same instinctual threat assessment when they see a biker in the field? Do these targets encourage and reinforce discrimination and profiling against bikers, or worse?

It only makes sense that biker practice targets reinforce a discriminatory mindset that has persisted for decades. But what do the experts or studies say? Experts and university studies both say the instinct to shoot is intimately tied to the visual depiction of the target. And subject matter experts agree that biker shooting targets are dangerous, and all use of such targets should completely cease.

A company called Baker Targets offers a practice target called the “Bad Biker Target”. The ad reads “Bad bikers need to be terminated!”. The ad depicts a masked man pointing a handgun with his right hand while riding a motorcycle. Aside from the fact that reality requires your right hand to be on your throttle while riding or you will rapidly decelerate, this image contains red dots indicating high value targets within the target. Notice one of these is on the front tire! 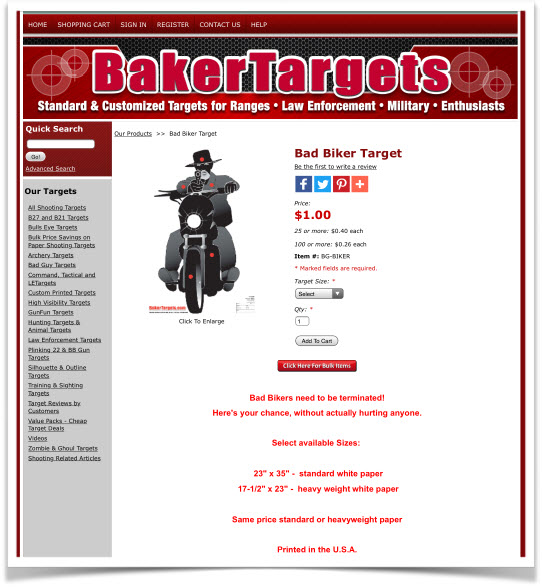 Retired 1st Sgt. Bobby Colella, a Subject Matter Expert on the U.S. Army’s premier marksmanship training system, has trained thousands of Soldiers in marksmanship skills. Colella says, “If any police department or officer is found using “Bad Biker” targets on or off duty, it’s a logical assumption that they are conditioning their minds to automatically perceive a threat, and subsequently eliminate that threat, based on the observation of a person who resembles a motorcyclist.  Perhaps this is what happened in Waco?”

“In conventional warfare, the enemy is identified by his uniform – In civilian policing, the threat should be identified by its actions, and actions alone. Motorcyclists are not at war with the police; they shouldn’t be at war with motorcyclists. These targets MUST be immediately removed from any inventory or range facility.”

Dr. Will Dulaney, an Associate Professor of International Security with over 25 years subject matter expertise in Counter-terrorism and Counter-insurgency says, “The “Bad Biker Target” reinforces a stale negative stereotype of bikers, but also establishes a new “biker threat” to law enforcement: the ride-by biker shooter. And military research over the past nearly seventy years establishes conclusively that these types of targets have a direct and powerful psychological impact on trainees’ willingness to engage human targets.”

“When used in repeated training scenarios – otherwise known as “programming” – law enforcement trainees will likely adopt the conditioned perception that motorcyclists now represent a threat while riding their machines.

Indeed, anyone who purchases and uses these targets, even in fun, will also be conditioned over time to “see” motorcyclists as more and more of a threat. Either way, the result for society can only be negative.”

A study conducted by the University of Chicago in 2007 concluded that stereotypes in targeting training creates a bias influencing the decision to shoot a target, even an unarmed target. “As predicted, frequent presentation of stereotypic (vs. counterstereotypic) targets exacerbated bias.” The study continues, “In the domain of criminal justice, category-based judgments can have profound consequences through….the spontaneous, split-second reactions of a police officer.”

Stereotypes systematically bias reactions in shoot/don’t shoot decisions. Stereotypes in targeting increase the perception of danger in real life applications. “Perceptions of danger bear directly on the decision task in these studies, [shoot/don’t shoot] which involves the detection of a hostile target.” To the extent that targets seem more dangerous, “they should promote a tendency to shoot, facilitating correct responses for armed targets but inhibiting correct responses for unarmed targets.”

Fortunately, the University of Chicago study provides a possible solution. Eliminating the use of targets that reinforce stereotypes of danger also reduces the probability of shooting unarmed targets. This data can also be seen in a more positive light. The data offers evidence that “counter-stereotypic information can reduce or even eliminate bias, at least on a temporary basis.”

Ending the Use of Discriminatory Training Targets

Baker Target’s depiction of motorcyclists reinforces a discriminatory mindset that has resulted in decades of profiling and abuse. These targets depict motorcyclists as dangerous criminals and the enemy of law enforcement. The message is explicit. Bad Bikers need to be terminated! How many law enforcement agencies utilize the Bad Biker Target? How many bikers have been victims of felony-style stops at gunpoint for simple traffic infractions because of their training? Why is it acceptable to exploit and vilify a class of 10 million Americans for economic gain?

These are questions that Baker Targets, and other companies selling similar targets, should be forced to answer on moral and ethical grounds. Baker Targets, law enforcement, and other entities either selling or buying targets like “Bad Biker Target” should cease and desist. Law enforcement officers and agencies that utilize these types of targets should be held accountable. Motorcycle profiling is an epidemic in the United States and training law enforcement to treat motorcyclists as an inherent threat perpetuates this discriminatory mindset. Or worse, teaching that bikers should be terminated could potentially escalate harassment to homicide.