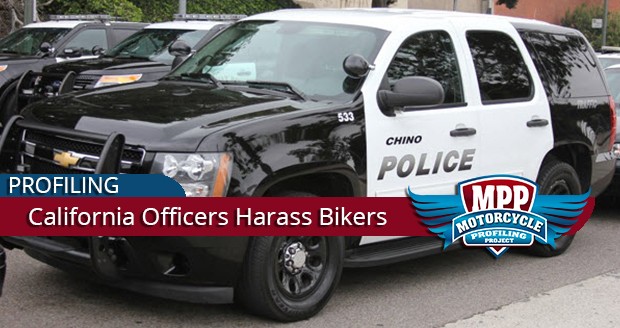 The Motorcycle Profiling Project recently received a copy of two formal complaints sent to the Chino Police Department relating to a blatant instance of motorcycle profiling and discrimination involving a member and prospective member of the Hessians Motorcycle Club.

Mr. Bill G and a Mr. Bill E were followed and then stopped on a bogus pretext. Officers proceeded to unconstitutionally search both individuals and their property without consent or probable cause. The stop also extended far beyond accepted 4th Amendment stop duration standards. This stop typifies the experience of thousands of motorcyclists on a regular basis. The pattern of motorcycle profiling in the state of California is irrefutable and the epidemic requires legislative relief.

On the evening of March 12, 2016 Bill G and Bill E were leaving a bike shop in Chino when they noticed they were obviously being followed by numerous Chino Police vehicles as they came to a stop at a light. Mr. E describes in a formal complaint to the Chino PD:

As we left The Bike Shop…we witnessed several Chino PD vehicles at 5th Avenue to our right. As we passed 6th Avenue, I witnessed more Chino PD vehicles to the left. They immediately pulled out behind us. We were obviously aware of their presence. There should not have been an issue. We were following the posted speed limit and all traffic laws.

As we approached Central Avenue, I could see the police cars change lanes in my mirrors. The light was already red  as we STOPPED and put BOTH feet down. We looked left, looked right  and left again. We proceeded to make a right turn onto Central Ave. To our surprise the Chino  PD vehicle’s red lights came on. Within seconds the sirens followed as we were pulling over to the nearest safe spot.

I was told to keep my hands on the handlebars. Officer Bemowski told me to remove my helmet, set it down and remain with my hand on my bars. He then stated he had stopped me (us) for “running a red light.” (not something anyone would do knowing that police are behind them)

After being detained, both individuals had their persons searched without consent.  Bill E continues:

As he proceeded to remove Mr. G from his motorcycle, Officer Bemowski turned Mr. G around and searched him, removing all of his belongings. As I watched this I could see several Chino police officers standing behind me. After Bemowski was finished with Mr. G he sat him on the curb and approached me.

Bemowski removed me from my bike, turned me around, and asked, “Do you have any weapons?”

Not once was I asked for my drivers license, registration, or insurance.  Instead  Bemowski helped himself to my belongings without my consent, handing them over to another officer. My wallet was riffled through. After everything was emptied out of my many pockets, (note- still nothing illegal nor any weapons) I was sat down on the curb.

Clearly the officers were not motivated by a red light violation. Bill E says a female officer “proceeded to have me pull up my shirt front and back and ask questions about my tattoos. As she was doing this, an unmarked gang task force unit arrived.

The Officer exited his unit and stated, “I saw these two earlier.” As he walked around me he stated, “Ohhh. No, these are not VAGOS. I wish they were.” As another officer proceeded to ask me, “ What’s with all the VAGOS lately anyhow?” I responded, “How should I  know?”

“As the search continued (all for an alleged red light citation) his hand brushed against my silver pin on my vest. His then offending statement, “Oh sorry, I touched your 1% ‘er Diamond.” But in reality it was NOT a 1% ‘er diamond. He clearly was exhibiting his prejudice towards my looks  or “class of persons.”  This is called profiling, and it is unconstitutional.”

Absent probable cause or consent, a search of an individual’s vehicle is considered unreasonable under  the 4th Amendment. Obviously there was no probable cause for a search in this instance. After the questionable personal searches found nothing illegal (no doubt justified through officer safety) their was no justification for vehicle searches. But that’s exactly what happened.  Mr. E continues:

“I then Watched Bemowski rifle through Mr. G’s bike without consent, including his bags.”

Bill G’s complaint confirms that the denial of consent was ignored by all officers involved.

“I CLEARLY stated that, loud enough that ALL officers on the scene could hear me, “I do NOT consent to ANY search of my person OR property.”

This was a violation of my 4th Amendment rights to the United States Constitution. To only be ignored, as though I’ve been judged as some kind of criminal or someone to be taken advantage of, is unacceptable and must be reprimanded.

“Officer Bemowski now turned his attention to my bike. He asked, “May I search your bike?” I responded, “For what reason?”  He stated, “For my own safety.”

I told him he had no right to search it. As he began removing bag after bag he opened each one and dumped the contents, including tool pouches and overnight belongings, onto the street. With one last compartment left he asked, “Where is your registration and insurance?”

I replied, “It’s in the only compartment left you have not removed my belongings from.”

The officer then asked whether Mr. E had been drinking or doing drugs. Obviously not.
At this point the search goes from unreasonable to completely abusive when a Chino PD officer rips Mr. E’s seat from the bike destroying the holding tab. The complaint continues:

After successfully finding my current registration and insurance card, he then asked me, “Whats under the seat?”

I responded “my battery.”  He asked, “How do you remove the seat?”

I responded, “You have to remove the bag located on the rear of the seat in order to access the  bolt that holds it down.”

To my surprise Officer Bemowski had pulled up my seat without removing this bolt and had it spun sideways, obviously not the correct way to remove it…

After all this abuse, not a single illegal thing was found. I was handed a citation, # 276003, for allegedly running a red light and told I may pick up all my belongings and put them all back in my compartments.

I started doing so when I asked Officer Bemoski, “How should I re-install my seat after you forcefully pulled it up and bent the holding tab?”

He replied, “I guess that’s why you have all those tools laying on the ground.”

Independent of of no cause or consent for vehicle searches, this incident also violates the common 4th Amendment principle of reasonable stop duration. Traffic stops are only allowed to last as long as it  would take a reasonable officer to issue a citation under the particular circumstances. Although there is no hard and fast rule, 20 minutes was identified in a recent Supreme Court case as reasonable. Bill E says that the stop “lasted well over an hour.”
Moreover, the officer had already searched Mr. E’s bags BEFORE he asked for identification. The officer was intentionally extending the duration of the stop with no probable cause or reasonable suspicion justifying his extensive search instead of immediately asking for identification and issuing a violation.

In conclusion, Mr. G and Mr. E were targeted, followed, stopped, and harassed based on their appearance, as opposed to their behavior. This stop typifies the practice of using a minor traffic infraction as a pretext for an investigatory stop. And like most profiling stops, this stop also violated well established 4th Amendment protections. As the pattern of evidence continues to mount, legislative action provides the best opportunity to end the practice of motorcycle profiling currently hiding under the cover of pretext in California and most of America.

11 Responses to Hessians MC Targeted and Harassed by Chino PD