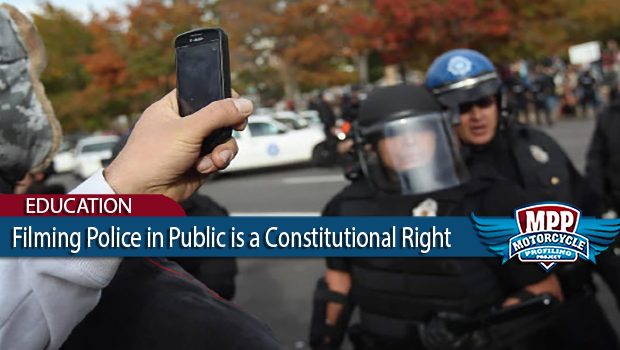 Does a person have the right to film police officers in public? Despite clear precedent, the MPP has received the inquiry many times. This is a particularly relevant question relating to developing a “pattern of evidence” that proves motorcycle profiling is occurring. Indeed, video of police profiling motorcyclists was critical to passing the law addressing motorcycle profiling in both Washington State and Maryland.

As Americans, we should all be able to agree that the right to be present in a public place and gather information about an ongoing public concern is fundamental to a free society. This is the essence of political expression, political speech, and a free press, particularly when discussing issues of government accountability.

To deny the right to gather information in a public space would deprive the public knowledge about government abuses. Without this knowledge there is no impetus for advancing police accountability.

A Legal Opinion-Simple and Concise

Millie Thompson, an attorney from Austin involved in both the criminal and civil proceedings stemming from the Waco tragedy that occurred on May 17, 2015, recently discussed the issue on social media. Thompson writes:

For those of you who don’t know:

We therefore have the right to film them.

This is not a privilege.  It is a Constitutional right.  Period.

Filming the police may not be something you would consider doing. You may also not be the type of grab a picket sign and take to the streets to protest something.

Pick a topic about which you are passionate – whatever it is – it doesn’t have to be something I agree with.

You don’t have to agree with a person’s agenda to defend their First Amendment rights around that agenda.

Do you believe in government accountability? Don’t people need to know what the government is doing in order to hold them accountable?

The right to express information relating to an ongoing public concern often frames discussions concerning the 1st Amendment. Less commonly understood is the equally fundamental right to gather that information. Moreover, in an era of cell phone videos and social media the courts have granted individual citizens the same fundamental right to gather information in public as it has traditionally afforded the credentialed press.

In Buehler v. City of Austin (2014), the federal court concludes that the right to film the police in public derives from “foundational and long-standing principles of constitutional law.”

“A private citizen has the right to assemble in a public forum, receive information on a matter of public concern—such as police officers performing their official duties—and to record that information for the purpose of conveying that information.”

Despite the fundamental right to record the police, caution is in order. The right is not absolute and without limits. When filming police take care not to break the law or interfere with an officer’s ability to do their jobs.

2 Responses to Filming Police in Public is a Constitutional Right