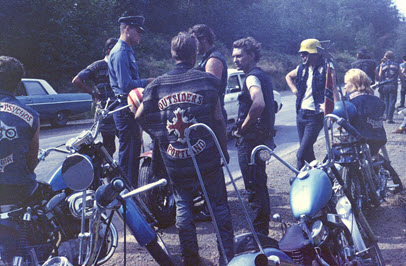 The truth. The truth about outlaw motorcycle clubs. Not the version you see on TV. It’s not Sons of Absurdity or Gangland. It’s not rape, pillage, and organized crime. But it’s not the church choir or the Boy Scouts either. The truth is that self-identified outlaw motorcycle clubs are rebellious, anti-establishment, and very critical of law enforcement and government abuses of discretion.

Motorcycle clubs, including outlaw motorcycle clubs, are also genuinely dedicated to charity and fundraising for bikers in need. The entire culture is based on the concepts of loyalty, honor, and respect. But make no mistake. Do not take kindness for weakness. Verbal disrespect will not get you shot, stabbed, or killed. That would require a physical threat to person or loved one and most likely in self defense. However, getting smacked for running your mouth is not outside the realm of possibility.

Motorcycle club culture has been heavily influenced by veterans returning from war. World War II veterans first. Then the explosion of clubs following Vietnam solidified outlaw motorcycle clubs as part of American culture. Rebellious and looking for acceptance not given by a post-Vietnam America, veterans formed motorcycle clubs that created an environment of brotherhood and support outside of mainstream society. Outlaw motorcycle clubs embraced the outlaw mythology and the role of anti-establishment rebels.

Equating the term “outlaw” with “criminal” is purely a law enforcement conception embraced by a sensationalized media. Reality does not justify the claim. Sure there are criminals and felons in some outlaw motorcycle clubs. But no more so than law enforcement or most other large communities.

The courts, at least many outside of Texas, do not agree with law enforcement. Attempts to equate membership with criminality or reasonable suspicion of criminality have been rejected. Motorcycle clubs and their colors, including 1% or outlaw motorcycle clubs, are forms of expression and association that are explicitly protected by the 1st Amendment to the U.S. Constitution. (see How Waco Is Being Used To Decimate The 1st Amendment JUNE 26, 2015 )

Many state legislators do not agree with law enforcement. The movement to end motorcycle profiling has been gaining momentum and is law in Washington State. Anti-Profiling legislation unanimously passed the Maryland Senate in 2015. Nearly 20 states have passed laws or judicially determined that motorcycle only checkpoints amount to illegal campaigns of selective enforcement. Legislators are beginning to see through the propaganda and place checks on law enforcement policies driven by discrimination. (see About The Motorcycle Profiling Project)

The reason the courts and many legislators disagree with law enforcement relates to the idea of freedom of expression in a free society. Individuals should be judged by their own actions, not the actions of others merely based on an association with that person. Individuals should not be targeted merely because of their appearance or membership in any organization. Remember McCarthyism? No individual should be the target of law enforcement actions absent particularized reasonable suspicion or probable cause based on behavior, not appearance.

And who objects to every single one of these protections for motorcyclists? The law enforcement lobby does. Every single time. Law enforcement is programmed to reject every criticism of law enforcement policy and procedure. Authorities have fully embraced a skewed narrative defining motorcycle clubs as criminal. But the legislative and judicial branches have thus far rejected these broad assessments of an entire class of people.

I am NOT saying that bikers rise to the historical level of importance of any of these examples. I am saying that the outlaw label has historically been applied to, and embraced by, many people fighting against discrimination and law enforcement abuse.

Any socially or politically active group opposed to law enforcement policies becomes a target. Oppositional groups are labeled criminals in an attempt to discredit and dismantle them while the general public does nothing. This is their job. The job of maintaining the status quo and enforcing the policies of government.

Loyalty, honor, respect. A love for riding motorcycles. A passion for a free society where you are judged by your actions, not your appearance. The desire to be left alone and not be harassed. This includes the self-respect to stand your ground and not allow anyone to abuse or disrespect your person. True, most people in mainstream society will tolerate more from others. But no one cares more about the concepts of freedom and honor than an outlaw biker.