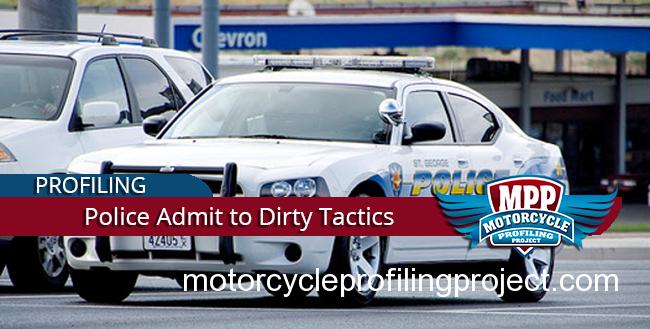 There is a fundamental misunderstanding by many in law enforcement that membership in a motorcycle club is to be treated as probable cause that a crime is occurring.  This common misconception is perfectly demonstrated by public comments made by police in St. George, Utah relating to motorcycle clubs and the fact that they target them in order to discourage motorcycle clubs from riding their motorcycles in St. George. The arrogance of these statements proves a fundamental lack of understanding related to basic constitutional principles related to the 1st Amendment and the 4th Amendment. Utah motorcyclists should unify in an effort to pass legislation addressing the issue of motorcycle profiling and reduce the mentality currently exercised by the St. George PD.

“The Bandido outlaw motorcycle club has a chapter in the city and law enforcement is doing everything it can to prevent more.”

“We’re kind of, best word I can think of is a shiny pearl to these clubs that they would want to get a foothold in St. George,” Sgt. David Williams said.

“Sgt. Williams says officers have been putting the heat on club members, citing them for minor violations.  “We try to make ourselves a hard target. That they don’t want to be here. They realize they are getting police attention, they know we are watching so they want to move on,” Sgt. Williams said.

The SGPD must be taught that motorcycle clubs, including those clubs labeled organized or criminal gangs by authorities, are 1st Amendment protected associations. There is “no evidence that by merely wearing [1% motorcycle club] “colors,” an individual is “involved in or associated with the alleged violent or criminal activity of other [1% motorcycle club] members. It is a fundamental principle that the government may not impose restrictions on an individual “merely because an individual belong[s] to a group, some members of which committed acts of violence.” In fact, the Supreme Court has long “disapproved governmental action . . . denying rights and privileges solely because of a citizen’s association with an unpopular organization.” Healy v. James, 408 U.S. 169, 185-86 (1972).

In fact, a source personally familiar with the Bandido membership in St. George reports to the MPP that none of the St. George chapter of Bandidos has a criminal record or history of criminal activity.  The SGPD admits that they specifically target individuals in this chapter for nothing more than being Bandidos. No individualized reasonable suspician or probable cause is considered.

To permit police “to object to any person on public roads who wears the insignia of [a 1% motorcycle club], without regard to or knowledge of that individual’s specific intent to engage in the alleged violent activities committed by other members, is antithetical to the basic principles enshrined in the First Amendment and repugnant to the fundamental doctrine of personal guilt that is a hallmark of American jurisprudence.