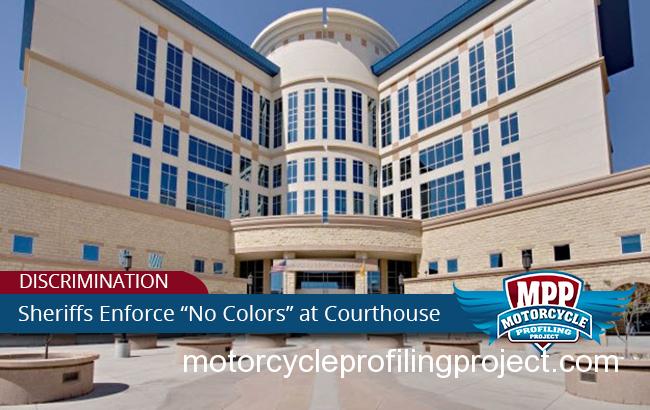 Members of the Guardians of the Children, a nonprofit organization of motorcyclists in New Mexico dedicated to supporting abused and abandoned children, have recently been denied entrance into the courthouse unless they remove clothing identifying affiliations with motorcycle organizations. In fact, Sheriffs have expanded banned clothing to include anything motorcycle affiliated. This is a blatant violation of the 1st Amendment and the practice should immediately cease and desist.

According to Torrez, sheriffs at the Bernalillo Courthouse have been infringing on motorcyclist’s rights to expression specifically related to motorcycle club attire.

“First they told them [Guardians of Children] they had to turn their vests inside-out, the vest which portrays the patch of the organization . . . The members said they would not wear their vest inside out. Next they were asked to remove their vest and turn them inside out so none of the patches are displayed (which they have) so they can continue to support the children. Now your officers are telling them they may not wear any clothing that is motorcycle affiliated.”

“Officers have made prejudicial comments that they are nothing but motorcycle club members and Hells Angels supporters. Very negative comments such as this have been made several times, especially to the female members. Guardians of the Children have always attended in a peaceful, non-confrontational manner, even when officers have been rude and disrespectful.”

The Supreme Court says that individuals have the 1st Amendment right to wear clothing which displays writing or designs in a courthouse. In 1971, the Supreme Court concluded that a shirt reading “F*#K THE DRAFT” was protected expression. See Cohen v. California, 403 U.S. 15 (1971).

There are even Federal cases specific to motorcycle club colors. In Sammartano v. First Judicial District Court (2002) the court said that wearing of motorcycle club colors in a courthouse building is protected speech under the First Amendment, and arguments relating to intimidation or the potential for violence based on general stereotypes do not overwhelm this right. See Sammartano v. First Judicial District Court, 303 F.3d 959 (9th Cir.2002).

Recent Federal case law confirms that motorcycle club colors are considered protected expression.  A US District Court this past September, relying on Supreme Court precedent, concluded that the government may not impose restrictions on an individual solely because of displaying membership in a motorcycle club.

There is “no evidence that by merely wearing [motorcycle club] “colors,” an individual is “involved in or associated with the alleged violent or criminal activity of other [motorcycle club] members. It is a fundamental principle that the government may not impose restrictions on an individual “merely because an individual belong[s] to a group, some members of which committed acts of violence.” In fact, the Supreme Court has long “disapproved governmental action . . . denying rights and privileges solely because of a citizen’s association with an unpopular organization.” Healy v. James, 408 U.S. 169, 185-86 (1972)

The unconstitutional nature of denying the Guardians of Children entry into the Bernalillo Courthouse is irrefutable. Denying access to anyone wearing clothing that is motorcycle affiliated is draconian. Long-standing Supreme Court precedent and more recent Federal Appeals Court precedent specific to motorcycle club attire in courthouses are unequivocal in their defense of the 1st Amendment to the U.S. Constitution.

According to Torrez, on November 12th Guardians of Children President Frank Monanto, member Sylivianna Esquibel and Annette Torrez met with Sheriff Manny Gonzales to discuss the matter. In addition to “no colors” harassment, many of the Guardians of Children members “have received rude and uncalled-for treatment by several of the officers.”  Torrez says Sheriff Gonzales apologized for the treatment by his deputies and asked the NMRO to report the matter to their internal affairs division and “he will see the issue is addressed.”

In terms of the 1st Amendment issue, Sheriff Gonzales suggested making an appointment with Judge Nash, Chief Justice, where the violation can be addressed, says Torrez.

The NMMRO is doing exactly what all motorcyclists should do when faced with blatant discrimination. They are fighting back to solidify the rights base of motorcyclists in New Mexico and elsewhere. Exhausting administrative remedies opens a dialogue with those responsible for imposing policy and solidifies the NMMRO as a legitimate and active political entity.  Just as New Mexico can point to a decision in Nevada relating to motorcycle colors in a courthouse, others will be able to point to New Mexico.  As the pattern of evidence expands, every challenge to government restrictions on access to motorcyclists is more likely to succeed as do the legislative efforts to secure equal access.