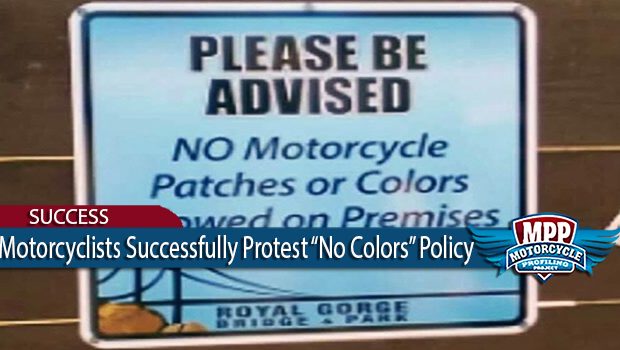 Royal Gorge Bridge and Park (RGB&P), located near Cañon City, Colorado, recently adopted  an over broad policy of discrimination against any individual wearing motorcycle-related patches or colors. So the National Council of Clubs (NCOC), an organization representing the interests  of motorcyclists nationwide, immediately protested the decision in the form of a written  complaint to RGB&P management.

Normally, private actors such as RGB&P cannot be sued for 1st Amendment restrictions because there is nothing unconstitutional about private actors discriminating. However, RGB&P leases the land from Canon City exposing the government actor to civil rights liability for the discriminatory acts of the private party.

After receiving the NCOC’s letter of complaint, RGB&P management contacted NCOC attorney Wade Eldridge and informed him that all “no motorcycle club colors” signs had been removed from the park and that the park reversed its policy. The NCOC verified on June 10th that all  signs have been removed. NCOC participants, members of motorcycle clubs including 1%’ers, have been granted access to the Park.

This is an important win for the NCOC and the motorcycle club community generally. Many motorcyclists frequent RGB&P and some club members have even had their ashes spread at the park.

Silence is consent. Grassroots political opposition is one of the most effective strategies for tangible change, as demonstrated by the NCOC.

Motorcyclists from Colorado and around the US wearing motorcycle-related patches and colors, including members of the Colorado Confederation of Clubs and National Council of Clubs, regularly visit the Royal Gorge Bridge (RGB&P) and Park in Fremont County, Colorado.

Recently, the RGB&P adopted a broad policy of discrimination against any individual wearing motorcycle- related patches or colors.

RGB&P’s discriminatory actions involve significant state involvement sufficient to establish a claim under 42 USC Section 1983. The nature of RGB&P’s lease with Cañon City and its proximity and dependence on Fremont County roads for access, puts the city and county into such positions of interdependence that they must be recognized as “joint participants” in acts of discrimination.

It is settled law that motorcycle patches and colors are Constitutionally protected by the 1st Amendment from acts of government discrimination.

RGB&P’s Policy Is Unconstitutional – Motorcycle Colors are Protected from State Discrimination By the 1st Amendment.

Any restrictions must be narrow and “specific to particular (apparently hypothetical) cases involving rival organizations.” Restrictions on motorcycle club colors are unconstitutional “absent a showing in the  record of actual (or realistic threat of) interference or disruption.” 14

There is “no evidence that by merely wearing [1% motorcycle club] “colors,” an individual is “involved in or associated with the alleged violent or criminal activity of other [1% motorcycle club] members. It is a fundamental principle that the government may not impose restrictions on an individual “merely because an individual belong[s] to a group, some members of which committed acts of violence.” In fact, the Supreme Court has long “disapproved governmental action . . . denying rights and privileges solely because of a citizen’s association with an unpopular organization.” Healy v. James, 408 U.S. 169, 185-86 (1972). 15

6 Brief Fact Summary: Burton (Appellant), brought an action under the Equal Protection Clause of the Fourteenth Amendment, claiming he was discriminated against because the Wilmington Parking Authority and the Eagle Coffee Shoppe, Inc. (Appellees), refused to serve him in their restaurant. The Appellant claims there is state action sufficient to bring a claim, as the Eagle Coffee Shoppe, Inc. leased its restaurant space from the City and the restaurant was attached to the Wilmington Parking Authority a City owned parking garage.