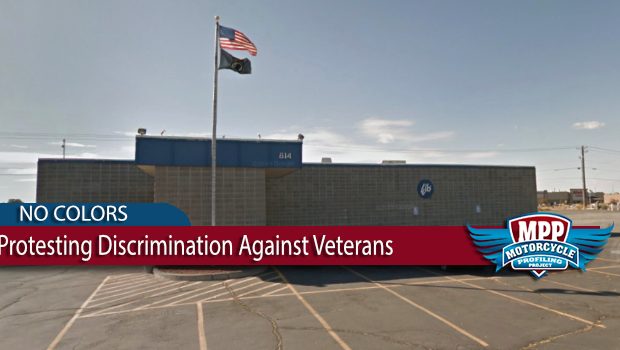 A Blueprint For Successfully Protesting “No Motorcycle Colors” Nationwide the act of law enforcement coercing private establishments to prohibit motorcycle club-related clothing and paraphernalia has grown to epidemic levels. The National Council of Clubs, representing motorcycle clubs and their member’s legitimate interests in all 50 states, stands in opposition to law enforcement coercion and encourages motorcyclists to organize and fight back!

A recent example in the state of Pennsylvania not only highlights the issue, but also provides a viable blueprint for successfully reversing law enforcement motivated discrimination in public accommodations. Ephrata Police attempted to coerce a local Elks Lodge into breaking a contract with the Lancaster County Motorcycle Club (LCMC) that planned on holding their annual Halloween party to benefit the Ronald McDonald House. Fortunately, the LCMC, the NCOC, and Motorcycle Profiling Project (MPP), organized a successful campaign blocking law enforcement’s efforts.

Lancaster County Motorcycle Club is “a family friendly group using our love of riding motorcycles to help charities and benefits in our community.” LCMC as a collective, have never had any interactions with any law enforcement agency, and has references from many facilities that have hosted them, or that they participated in events with. On August 15th, 2019, LCMC signed a rental contract with the Elks Lodge 1933 to hold their annual Halloween party to take place on October 26, 2019. LCMC had hired a band, and planned on renting a taxi for any intoxicated drivers, and had a motorcycle trailer on standby as well. With food, entertainment, and safety measures in place, everything was going as planned, and shaping up to be a successful charity fundraiser. That is until the Ephrata Police decided to get involved.

On September 23rd, a board member of the Elks Lodge informed LCMC that their party was canceled at the behest of Lt. Christopher McKim of the Ephrata Police Department. Lt. McKim, acting under the color of state law in a official capacity, and who is also a member of the Elks lodge, had several conservations with a board member and the president of the lodge, “advising” them “not to have the party because of the possible ramifications that could happen from it.” The board members of the lodge decided to have a meeting to discuss what they believed was a directive from the local police department. Lt. McKim told the board members that he was ‘tipped off’ by agencies that were higher than his. Lt. McKim falsely claimed that LCMC had ties to a Motorcycle ‘Gang’, and employed a scare tactic of asking the lodge what they would do in the event that something ‘bad’ happened. Based on the erroneous and sensationalized misinformation that was presented to them, the Elks Lodge decided to cancel the planned event.

Lancaster County Motorcycle Club was not happy about the slanderous information that was being spread about them, and made the decision to push back. The President of LCMC made several phone calls to the president of the Elks Lodge, as well as too Lt. McKim seeking an explanation as to why he would illegally influence a private business under the color of the law.

After several days and multiple attempts unanswered, LCMC President contacted the NCOC. On September 27th, 2019, I called Lt. McKim and requested an interview. Initially, he stated that he did not have time, and did not know what the questions were going to be in reference too. I informed him that I would be writing an article about his illegal actions, and would like to get quotes and/or his side of the story. Once this information was presented, Lt. McKim made time and decided to speak with this writer.

Lt. McKim denied pressuring the Elks Lodge to cancel event, stating that “we”, the Ephrata Police, “just wanted them to be aware of the situation, aware of the connection.” He stated that he had received information from other confidential sources that “trouble can arise, not that it will arise.” He stated that the police department contacts any venue that is holding an event discusses how they would handle the situation “if anything bad happened.” When asked whether he, or the Ephrata Police Department is against the Elks Lodge hosting the LCMC parties, he responded “NO, not at all.”

While this writer was informing the LCMC President of the conservation with Lt. McKim, the Lt. coincidentally decided to return the President’s phone call. Armed with this new information, LCMC was able to secure an audience with the Elks Lodge board members to discuss the issue of having their party cancelled.

Majority of the LCMC, as well as this writer, were present for a meeting with board of the Elks Lodge. Many of tired and true misconception about Motorcycle Clubs were brought up in the meeting. One board member, a retired Ephrata Police officer, even insinuated that if a certain Motorcycle Club was not invited, that there was going to be violence. This same board member reaffirmed what was believed when he stated that “we were basically told not to have the party.”

Armed with statistical data and evidence, as well as compelling personal and collective stories, LCMC was able to able to convince the board members that having the party would not result in any violence, and that Lt. McKims mischaracterization of them was exactly that. After the meeting LCMC was informed that all but one board member voted to allow the party to take place as originally planned.

On October 26th, LCMC held their Halloween party as planned. There were zero incidences of violence, zero complaints from neighbors, and zero involvement from any law enforcement agency. Most importantly, proceeds were able to benefit the Ronald McDonald House, which helps the families of sick children at Penn State Milton S. Hershey Children’s Hospital.

This is yet another example of what can be accomplished when the Motorcycle Club community works together for Our 1st Amendment Rights.